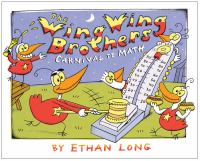 The Wing Wing brothers attend a carnival where they test their strength, participate in a hot dog eating contest, and go on a ride, all while learning about counting, adding, and subtracting by tens.

The Wing Wing brothers return for an encore, visiting a carnival and, incidentally, demonstrating a math concept: the usefulness of 10s in counting, subtracting, and adding up to 100. In the first chapter, Willy tests his strength by whacking the base of a high-striker game but scores only 10 points. Woody scores 30; Wilmer, 50; and Wendell, 90. Inadvertently bonking himself on the head and hitting the base as he passes out, Walter rings the bell and wins with 100. The other two chapters involve a hot-dog-eating contest and a Ferris wheel. Told through colorful, comical cartoon-style panels, a running text, and the occasional sound effect, the amusing stories open the way for kids to visualize and absorb the simple math lessons. Even zanier than The Wing Wing Brothers Math Spectacular! (2012), this picture book features the same winning combination of math and madcap fun. Copyright 2012 Booklist Reviews.

The eponymous fowl siblings, first seen in The Wing Wing Brothers Math Spectacular!, test their computing strengths in carnival activities that address counting, adding, and subtracting by 10s. In the first episode, Willy, Wendell, Woody, Wilmer, and Walter take whacks at a high striker ("Willy tests his strength. But he is a weakling. He scores 10"); a hot dog–eating contest and ride on the Wedgie Wheel offer counting addition/subtraction opportunities ("Can Willy eat the last 10 wieners? Yes! 10 – 10 = 0. Willy is the wiener winner!"). Long makes each concept clear in his comics-style panels, but he keeps the emphasis on fun throughout (each of the three story segments ends with a gag of some kind), augmenting these math lessons with plenty of laughs. Ages 4–8. (Jan.) [Page ]. Copyright 2013 PWxyz LLC

K-Gr 1—The Wing Wing brothers are five ducks whose adventures are intended to teach mathematical concepts. In three separate stories, they attend a Carnival De Math. In "Amusement 1," they try their hand at a strength contest; in the second, they purchase and then eat trays of hot dogs; and in the last, they ride the Wedgie (Ferris) Wheel. In each vignette, the Common Core math concept is stated at the beginning ("Counting to 100 by Tens," "Addition and Subtraction by 10 up to 100," and "Adding within 100, including a 2-Digit Number and a 1-Digit Number"). For Amusements 2 and 3, each step of the math is spelled out, while in Amusement 1, readers must draw their own conclusions. Though the stories are slight, the target audience will most likely enjoy the silly humor and cartoon illustrations, created with black Prismacolor pencils and colored digitally. Alliterative text raises the wacky factor, but also leads to the misstep of calling hot dogs "wieners." Elementary school children will be amused by the statement, "Wendell has 10 wieners," but probably not in the way the author intends. For larger collections where math titles are in demand.—Rachael Stein, Eastern Shore Regional Library, Salisbury, MD [Page 150]. (c) Copyright 2013. Library Journals LLC, a wholly owned subsidiary of Media Source, Inc. No redistribution permitted.

The Wing Wing brothers attend a carnival where they test their strength, participate in a hot dog eating contest, and go on a ride, all while learning about counting, adding, and subtracting by tens.

Those wacky birds, the Wing Wing Brothers, are back and running amok at the carnival! Readers will have a terrific time laughing at their antics as the brothers show off their strength, down hot dogs in a wiener war, and go for the ride of their lives on the Wedgie Wheel. All the while they will be learning about counting, adding, and subtracting by tens. "This is how learning math should be—painless, comical, and yes, spectacular," a starred Kirkus Reviews noted of the companion title, THE WING WING BROTHERS MATH SPECTACULAR!. A page for teachers and parents explains exactly how the book meets the Common Core State Standards.