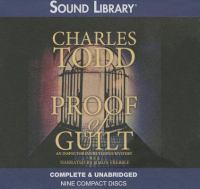 An unidentified body appears to have been run down by a motorcar and Ian Rutledge is leading the investigation to uncover what happened. While signs point to murder, vital questions remain. Who is the victim? And where, exactly, was he killed? One small clue leads the Inspector to a firm built by two families, famous for producing and selling the world's best Madeira wine. Alone in a no man's land rife with mystery and danger, Rutledge must tread very carefully, for someone has decided... that he, too, must die so that cruel justice can take its course.