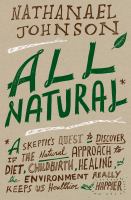 All natural A skeptic's quest to discover if the natural approach to diet, childbirth, healing, and the environment really keeps us healthier and happier

Scrutinizes "all-natural" philosophies to consider the negative aspects of extreme approaches to health care, an investigation that explores potential sources of health-care paradoxes.

In this engaging look at the merits of nature versus technology, journalist Johnson ultimately comes down on the side of "reunification" of the two. Raised by granola parents, Johnson freely admits that he believes in antibiotics, vaccines, movies, space exploration, and cribs for babies. But he also cites examples of when technology may go too far. In his liveliest chapter, called "Masturbacon" (with subtitles such as "The Chickenification of the American Pig" and "A Date with the Inseminator"), he watches the stimulation and artificial insemination of hogs. Forget the old-fashioned family farmer. As Johnson notes, "The motto of the more efficient, inseminating, vertically integrated megafarmer could be: More handjobs on the farm, fewer farmhands on the job." Johnson also discusses the stress of confinement for pigs. Some suggest breeding pigs that can happily stand on a small slab of concrete for their entire lives, or, as on a more natural farm, hogs can frolic in a "porktopia." Johnson's investigation is both horrifying and amusing, and readers will relish the colorful, witty writing and find much food for thought. Copyright 2012 Booklist Reviews.

Why are severe injuries to women during childbirth increasing in the U.S.? Can our prevailing assumptions about diet and nutrition "to a large extent be responsible for the epidemics in heart disease, obesity, type 2 diabetes, and osteoporosis"? How can humans be a functional, helpful part of nature rather than destroying it? These are some of the questions that journalist Johnson explores in his quest to "unravel the confusion surrounding technology and nature." His vehicle for investigation is wonder, which he proposes to be "the place shared by the rigorous science of the technological perspective and the creative free thinking of the natural perspective." Johnson was raised by hippyesque parents in the alternate lifestyle enclave of Nevada City, Calif., and his anxieties and struggles around such issues as computer games, the hiking epiphanies of his childhood, and home vs. hospital birth for his newly pregnant wife intertwine with his musings. Johnson, who studied with Michael Pollen at UC Berkeley, takes a similarly open-minded, nonideological approach, and Pollen's fans, as well as other readers grappling with the flood of conflicting information about how to live a healthy, nondestructive life, will appreciate this book's thoughtful and nuanced attitude and its often surprising conclusions. Agent: David Kuhn, Kuhn Projects. (Jan.) [Page ]. Copyright 2012 PWxyz LLC

An award-winning journalist scrutinizes the all-natural philosophies through which he was raised by hippie parents to consider the negative aspects of extreme approaches to health care, an investigation marked by his interviews with radical doctors, renegade farmers and a hermit forester that explores potential sources of health-care paradoxes.

Scrutinizes "all-natural" philosophies to consider the negative aspects of extreme approaches to health care, an investigation that explores potential sources of health-care paradoxes.

In this age of climate change, killer germs, and obesity, it's easy to feel as if we've fallen out of synch with the global ecosystem. This ecological anxiety has polarized a new generation of Americans: many are drawn to natural solutions and organic lifestyles, while others rally around high-tech development and industrial efficiencies. Johnson argues that both views, when taken to extremes, can be harmful, even deadly.Johnson, raised in the crunchy-granola epicenter of Nevada City, California, lovingly and rigorously scrutinizes his family's all-natural mindset, a quest that brings him into the worlds of an outlaw midwife, radical doctors, renegade farmers and one hermit forester. Along the way, he uncovers paradoxes at the heart of our ecological condition: Why, even as medicine improves, are we becoming less healthy? Why are more American women dying in childbirth? Why do we grow fatter the more we diet? Why have so many attempts to save the environment backfired?In All Natural* - a sparklingly intelligent, wry, and scrupulously reported narrative - Johnson teases fact from faith and offers a rousing and original vision for a middle ground between natural and technological solutions that will assuage frustrated environmentalists, perplexed parents, and confused consumers alike.