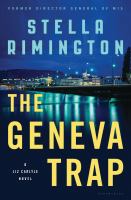 The details in this latest entry in the Liz Carlyle series of British intelligence spy thrillers—even down to such minutiae as the clothes favored by young agents versus older agents—ring so true that they could only come from someone who worked inside for a long time. Dame Stella Rimington did, beginning in 1968, when she joined MI5, and extending more than two decades, leading to her retirement as director general. The loneliness and difficulty of being an intelligence agent is accentuated here by the fact that Carlyle is a woman in a world still barricaded by men. A big part of the fascination in the series is in seeing how Carlyle navigates this world along with the larger one of international espionage. This time out, a Russian agent seeks out Carlyle with information about the potential cybersabotage of an Anglo-American defense program. The decades-old spy question of whom can you trust plays out against a backdrop of escalating terror in this time-sensitive, well-plotted thriller. Copyright 2012 Booklist Reviews.

Near the start of Rimington's compelling seventh Liz Carlyle novel (after 2011's Rip Tide), a Russian agent, Alexander Petrov, tells a British agent he approaches in a Swiss tennis club that he wants a meeting with "Lees Carlisle." Liz, who barely remembers the Soviet dissident she encountered at university at the time of perestroika and the collapse of the Eastern bloc, agrees to meet Petrov in a Geneva cafe, where he warns her of a cyberattack on a joint U.S./U.K. software project for controlling unmanned drone aircraft. Fearing another cold war if the attack succeeds, Petrov claims that an unknown country, not Russia, is behind the scheme. Once the Brits alert Andy Bokus, the no-nonsense head of the CIA's London office, this intelligent spy thriller is off and running. A family matter involving Liz dilutes the urgency of the primary plot somewhat, but the machinations of the intelligence business, which Rimington knows well as the former MI5 chief, fascinate. Agent: Georgina Capel. (Oct.) [Page ]. Copyright 2012 PWxyz LLC

When a Russian intelligence officer insists on speaking to no one but her about cyber sabotage that has brought down a U.S. communications satellite, MI5 agent Liz Carlyle learns of a plot to hack into the West's military and begins a race against time to stop a mole who would reignite the Cold War. 15,000 first printing.

When a Russian intelligence officer insists on speaking to no one but her about cyber sabotage that has brought down a U.S. communications satellite, MI5 agent Liz Carlyle learns of a plot to hack into the West's military and reignite the Cold War.

At a tracking station in Virginia, U.S. Navy officers watch in horror as one of their communications satellites plummets into the Indian Ocean and panic spreads through the British and American intelligence services.

When a Russian intelligence officer approaches MI5 with vital information about the cyber sabotage, he refuses to talk to anyone but Liz Carlyle. But who is he, and how is he connected to Liz?

Is this a Russian plot to disable the West's defenses? Or is the threat coming from elsewhere? As Liz and her team search for a mole inside the Ministry of Defense, the trail takes them from Geneva, to Marseilles, and to Korea in a race against time to stop the Cold War from heating up.