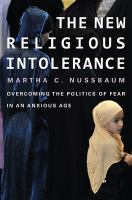 "What impulse prompted some newspapers to attribute the murder of 77 Norwegians to Islamic extremists, until it became evident that a right-wing Norwegian terrorist was the perpetrator? Why did Switzerland, a country of four minarets, vote to ban those structures? How did a proposed Muslim cultural center in lower Manhattan ignite a fevered political debate across the United States? In The New Religious Intolerance, Martha C. Nussbaum surveys such developments and identifies the fear behind... these reactions. Drawing inspiration from philosophy, history, and literature, she suggests a route past this limiting response and toward a more equitable, imaginative, and free society." -- Provided by publisher.