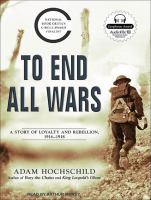 Hochschild investigates the causes and course of WWI, limning British prowar and antiwar opinions and groups before and during the war. He covers in great detail many individuals cited in historian Barbara Tuchman's monumental The Guns of August (1962). Listeners are treated to Morey's passionate reading of writings from James Kier Hardie, a founder of Britain's Independent Labour Party, among others, including members of the redoubtable Pankhurst family of suffragists, Field Marshall Sir John French, and Sinn Féin member Charlotte Despard. As might be expected in a hefty historical tome, the text is quite detailed, but Morey manages to keep things lively, especially when leavening in personal narratives and surprising expressions of humanity during the war, such as material about the 1914 Christmas truce. Informative and entertaining, this is a palatable version of monumental events that continue to animate the course of our world. Copyright 2019 Booklist Reviews.

Presents a history of World War I, focusing on the moral conflict between the proponents of the war and its critics in Great Britain.

An epic chronicle of the first World War places an emphasis on the moral dilemmas raised by the war's critics, citing the achievements and associations of famous detractors while exploring how the war's lessons have particular relevance in today's world. Read by Arthur Morey. Simultaneous. Book available.

World War I stands as one of history's most senseless spasms of carnage, defying rational explanation. In a riveting, suspenseful narrative with haunting echoes for our own time, Adam Hochschild brings it to life as never before. He focuses on the long-ignored moral drama of the war's critics, alongside its generals and heroes. Thrown in jail for their opposition to the war were Britain's leading investigative journalist, a future winner of the Nobel Prize for Literature, and an editor who, behind bars, published a newspaper for his fellow inmates on toilet paper. These critics were sometimes intimately connected to their enemy hawks: one of Britain's most prominent women pacifist campaigners had a brother who was commander in chief on the Western Front. Two well-known sisters split so bitterly over the war that they ended up publishing newspapers that attacked each other. Today, hundreds of military cemeteries spread across the fields of northern France and Belgium contain the bodies of millions of men who died in the "war to end all wars." Can we ever avoid repeating history?

Award-winning author Adam Hochschild explores the First World War with a particular focus on the conflict between the critics and the supporters of the war.