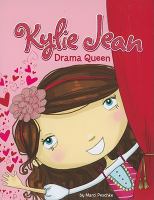 K-Gr 2—Kylie Jean lives in Jacksonville, TX, with her parents, brother, and pet bulldog named Ugly Brother. Ever since she was a "bitty baby," she has dreamed of becoming a beauty queen. As her mother perfects recipes for the Blueberry Festival competition, Kylie decides to enter the contest for pageant queen. She enlists the help of her cousin, and the two girls navigate the Internet without adults and print out an application form that includes the contest rules. The message of the book is very much focused on being pretty, like a princess or angel. In Drama Queen, Kylie Jean starts second grade and learns that the new girl, Paula DuPree, is mean, and that their class will be performing Alice in Wonderland. Kylie has her heart set on playing the Queen of Hearts, but when she learns that Paula has been cast in the role, she settles for being one of four Alices. Kylie Jean accepts her disappointment well, and she and Ugly Brother practice with gusto. When Paula comes down with chicken pox, Kylie Jean gets the part she dreamed of and takes cookies to Paula. The pink and gray illustrations throughout go well with these girly stories. These titles are a good length for early chapter-book readers and will appeal to those girls who like tiaras, ruffled skirts, and lots of pink, just like Kylie Jean.—Alison Donnelly, Collinsville Memorial Public Library, IL [Page 75]. (c) Copyright 2010. Library Journals LLC, a wholly owned subsidiary of Media Source, Inc. No redistribution permitted.

Kylie Jean wants to be Queen of Hearts in the class play.

Kylie Jean's class is performing Alice in Wonderland! Kylie Jean knows she'd be just perfect as the Queen of Hearts. But mean girl Paula wants the part too . . . .