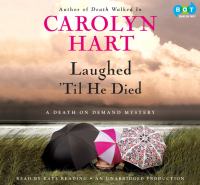 Laughed 'til he died

Three deaths are linked to Broward's Rock Island's youth recreation center, and its director. When she asks Max to help clear her name, Annie is right there with her husband to help.

Annie and Max Darling are right in the middle of the action when Jean, the director of the island's youth center, appears to be the epicenter of three murders. The Darlings are certain that the evidence is both circumstantial and coincidental, but Jean has an excellent motive for one of the murders. Were the others merely collateral damage, as the police suggest? It's a complicated investigation, and narrator Kate Reading is put through her paces having to voice a variety of Southern and Northern accents, male and female, and an endless variety of ages. Reading has narrated the entire series and is comfortable with the characters, particularly with the cast who hang out in Murder on Demand. The well-plotted story makes up for the whining of some of the "guest" players.—Jodi L. Israel, MLS, Birmingham, AL [Page 40]. (c) Copyright 2011. Library Journals LLC, a wholly owned subsidiary of Media Source, Inc. No redistribution permitted.

“Those looking for a change of pace from more street-smart crime fiction will enjoy this cozy whodunit in the Agatha Christie tradition.” —Publishers Weekly Intrigue and foul play are no strangers to the idyllic South Carolina sea island of Broward’s Rock. Mystery bookstore owner Annie Darling and her husband, Max, who specialize in solving problems, plunge into a startling web of danger and deceit when a trio of deaths is linked to the island’s youth recreation center. With the evidence mounting against her, the center’s director seeks out Max to clear her name. When it comes to intrigue, where Max goes, Annie isn’t far behind. To save an innocent woman, the pair scrambles to unravel three complex interlinked puzzles: the mystery of three guns, the pulled-out pant pockets of one victim, and the disappearance of a teenager whose stepfather always had the last laugh—until he died.