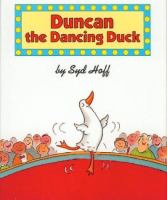 An irrepressible dancing duck leaves his pond to find fame in the big city, but after receiving a Golden Duck Award he only wants to return to his family.

Like Hoff's Bernard on His Own , this tale concerns a youngster who seeks adventure despite parental remonstrations. Irrepressible Duncan first experiences the limelight when his dances amuse his four fellow ducklings. Though his mother tells him to ``stay in line'' as the family paddles around the pond, Duncan can't resist doing jigs for the pigs, the chickens and, finally, the farmer and his wife: ``They watched him dance around the kitchen without breaking a dish. `He's good,' said the farmer.'' Duncan soon appears on TV and wins international acclaim; fame proves exhausting, however, and the farmer and his wife look concerned as they escort the dog-tired duck back to his pond. Hoff's economical and subtly funny text clearly points out the give-and-take in Duncan's family: when the prodigal duck returns, he does ``one more dance--just for his mother,'' to acknowledge his gratitude for his freedom and for the security of home. The illustrations are likewise basic and adroit--Duncan's eyes are closed in a reverie and his beak is held proudly as he twirls, and his multi-specied fans smile and wave with enthusiasm. This picture book is winningly light on its feet, conveying a timeless, cheerful simplicity. Ages 4-8. (Apr.) Copyright 1994 Cahners Business Information.

PreS-Gr 2-Duncan is a duckling who dances his way from the pond to international stardom. But after winning the Golden Duck Award, he's exhausted and returns home ``to swim, swim, swim with his family,'' performing just one more dance-for his mother. Vivid colors enhance Hoff's typical, stylistic cartoons. The simple text accompanied by the bright and bold pictures makes Duncan a real charmer. He'll be a star for years to come.-Gale W. Sherman, Pocatello Public Library, ID Copyright 1994 Cahners Business Information.

An irrepressible dancing duck leaves his pond to find fame in the big city, but after receiving a Golden Duck Award he only wants to return to his family

Duncan the duck loves to dance in the pond, to his mother's dismay, and when the farmer and his wife bring Duncan to town and command him to "do his stuff," he does--to universal acclaim.

An irrepressible dancing duck leaves his pond to find fame in the big city, but after receiving a Golden Duck Award he wants only to return to his family.