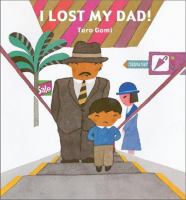 I lost my dad

A small boy loses his Dad while browsing in the toy section of a department store.

Ages 4-7. The Japanese author of titles such as Everyone Poops (1993) and The Crocodile and the Dentist (1994) returns with another story that draws from every child's anxieties. This time the focus is on a boy who becomes separated from his father while browsing the toys in a department store. Illustrated in Gomi's simple, distinctive watercolors, the clever cutaway pages add tension and suspense to the boy's search: "He's there! Those are his shoes," reads the text, while a turn of the page flap reveals that the shoes don't belong to Dad. Young ones will immediately connect with the boy's panic and then relief when Dad is found. Appealing, universal, and well-designed, this is a good choice for lap reads or for children beginning to read on their own. ((Reviewed March 1, 2001)) Copyright 2001 Booklist Reviews

The creator of Everyone Poops here focuses on a common if less universal experience: a child becomes separated from a parent. Originally published in Japan in 1983, the book has minimal text. What carries the book is Gomi's quirky, stylized art and some diverting graphic manipulations to chronicle a boy's search for his father, whom he loses in a department store. As a result of creatively die-cut pages, the boy repeatedly spies only a portion of what he thinks is the man's image (a single arm and leg of a suit, a pair of shoes, a hat). But each time, a flip of the page reveals that the child has spied someone else instead, until at last the boy finds his missing parent on the escalator. The child wanders into the men's room and spies the backs of two men at urinals neither of whom, he discovers when they turn their heads, is his father. Children will happily take part in this playful quest, which helps to assuage this common fear with its happy ending, and parents will welcome the opportunity to discuss what steps to take if the situation arises in their own family. Ages 4-8. (Mar.) Copyright 2001 Cahners Business Information.

PreS-Gr 1-An important subject to children and their caregivers is given inadequate treatment here. When a young boy loses his father in a large department store, he begins searching for him. He catches several partial glimpses of patterns or clothing that he believes his dad is wearing but each time he is distressed to discover that they belong to someone else. The child finally locates the irritated man on an escalator and the book ends with the boy being led out of the store. The story offers little to children to help them understand or cope with a frightening experience of this kind. None of the adults in the book, who appear either expressionless or frowning in the watercolor paintings, recognizes the boy's situation or offers help, and the reunion between father and son is unsatisfying. The text is stilted and does not sound like the voice of a young child. The pages that are partially cut away to provide the snatches of fabric and clothing the boy spies from afar may provide some interest for children, but the overall mood of the paintings and sparse text is cold and uninviting.-Ellen Vevier, Round Rock Independent School District, TX Copyright 2001 Cahners Business Information.

When a little boy loses sight of his father at a big department store, he searches all over the establishment, tracking people whose appearances match his parent's in some way.