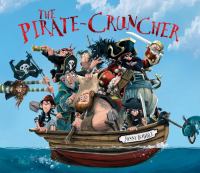 A mysterious old pirate lures a group of rowdy sailors to an island with buried treasure, but there is a surprise awaiting them when they get there.

Just when you think there couldn't possibly be space on the shelf for another pirate-related picture book, another comes around that reminds you pirates may well just be one of those inexhaustible mines. A loony old fiddler enchants a pirate crew with a tale of unimaginable treasure on an island far out to sea. The good ship Black Hole sets out with the fiddler aboard, whetting the crew's insatiable appetite for booty, then inflating their fears with warnings of a monster who "likes to eat pirates who come for the treasure, / and chews up their ships just for good measure." Captain Purplebeard won't have any of it, and even if kids see the truth lurking beneath a final gatefold, it doesn't make the pirate-gobbling monster's splash appearance any less squeal worthy. Duddle's digital artwork has the cartoony physicality of high-tech animated art without the off-putting CGI sheen one might expect. The goony, googly-eyed buccaneers heaped onto each page and the chantey cadences of the text make this a certain winner for jaunty read-alouds. Copyright 2010 Booklist Reviews.

Duddle's debut launches a boatload of silliness, as Captain Purplebeard and his crew of babbling, bumbling pirates set sail in search of treasure. Galvanized by a skeletal fiddler's chantey about "an island of gold," the pirates ignore his warning that "none who've tried to set foot on its sands/ have ever returned to pirate lands." Most have second thoughts when the fiddler adds that they're apt to encounter a pirate-eating beast, but the greedy captain is undeterred: "Any cowardly landlubbers will be tossed in the sea./ The only thing you should be scared of is me!" Boisterous, flashy digital illustrations (the entire book could be a storyboard for an animated short film) are paired with b&w line drawings (in thought balloons), which present the apprehensive crew members' outlandish imaginings of the bloodthirsty creature. The page showing the pirates' landing folds down to reveal that the island is actually the very top of a sharp-toothed, octopus-like monster, who gobbles the pirates with a loud "crunch!" Though the verse's rhythm is occasionally rocky, the pirates' humorous chatter and the art's exuberance more than compensate. Ages 3–up. (Apr.) [Page 56]. Copyright 2010 Reed Business Information.

K-Gr 3—The dastardly Captain Purplebeard and his greedy crew are on the track of "…a shipload of treasure!...Diamonds and rubies and gold beyond measure…." They set sail in their ship, The Black Hole, following a mysterious fiddle player (are those strings on his arms and legs?) who has a treasure map. Heedless of the subsequent verses of the fiddler's song, which warn of some sort of monster "pirate cruncher," the motley crew also disregards certain other strange happenings and perseveres to their ultimate end. Their fate is told mostly in rollicking but sometimes uneven rhymed text. The striking illustrations in bold colors are digitally rendered with great effect, delineating each individual pirate and slyly hinting at the surprise that's coming—visual clues that every self-respecting pirate lover will delight in pointing out knowledgeably after the first reading. An amusing book to savor and enjoy.—Judith Constantinides, formerly at East Baton Rouge Parish Main Library, LA [Page 82]. Copyright 2008 Reed Business Information.

A mysterious old pirate lures a group of rowdy sailors to an island with buried treasure, but there is a surprise awaiting them when they get there.

A whimsically detailed sea adventure finds a haphazard crew of greedy pirates voyaging toward a mythical island bursting with hidden treasure that they subsequently learn is guarded by a fearsome monster. A first book.

A hilarious picture book debut has a scurvy crew setting off for an island of gold, where an unexpected development awaits under the final flap.I was sailing along and what did I see?An island of GOLD in the scurvy sea!But there's one small thing I forgot to share "there's also a MONSTER waiting there.A mysterious old pirate tells a tavern of salty seadogs about an island bursting with hidden treasure. But once they set sail, he also mentions that it is guarded by the terrible Pirate Cruncher. When the pirates' greed gets the better of their fear, there's a big surprise in store!