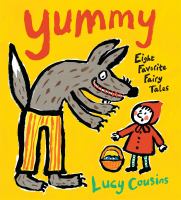 *Starred Review* Lucy Cousins, best known for her Maisy picture books, presents eight familiar tales: "Little Red Riding Hood," "The Three Billy Goats Gruff," "The Enormous Turnip," "Henny Penny," "Goldilocks and the Three Bears," "The Little Red Hen," "The Three Little Pigs," and "The Musicians of Bremen." A glance at wolf on the book's jacket, sharp claws and teeth at the ready, will reassure readers that this is no pastel, bowdlerized version of folklore. Yes, a hunter chops off the head of Red Riding Hood's wolf, but the deed is so matter-of-fact in the telling and so bloodless and cartoon-like in the illustration that children are unlikely to flinch when justice is done. The writing is simple and direct, as befits these traditional tales. Illustrated in Cousins' signature style, the bold, childlike pictures feature broad strokes of black paint defining the forms of characters and elements of the setting. The scale of the illustrations is so large that their effect might overwhelm a bit when seen at close range. At a little distance, though, their clarity, drama, and energy are evident. Absolutely perfect for the youngest. Copyright 2009 Booklist Reviews.

Anyone expecting the gentleness of the Maisy books in Cousins's retellings of eight fairy tales is in for a whopper of a surprise—although the cheeky title does provide a tip-off. Who knew Cousins could depict a wolf decapitation ("Little Red Riding Hood") or stewing ("The Three Little Pigs") with such relish? Or that she'd find a creepiness factor in the Henny Penny story worthy of Flannery O'Connor? Cousins embraces all the primitive, enduring fears and desires that drive these stories, and then beckons readers to hop on a rollicking narrative roller coaster ("I'm going to gobble you up," says a troll, threatening the biggest of the Billy Goats Gruff, who responds, "Then I'll bash you to bits"). There are thrills big and small on every color-saturated page: a Goldilocks who sports ginormous pigtails that seem to have an emotional life all their own; the hairy orange goat-eating troll with his neon green mani-pedi; a little red hen with enough feminine industriousness to rival Rosie the Riveter. Make room on the shelf. A new classic has arrived. Ages 3–up. (Aug.) [Page 139]. Copyright 2009 Reed Business Information.

Revamps eight classic stories, from "Little Red Riding Hood" to "The Musicians of Bremen," retaining all the emotion and humor from the original fairy tales.

The acclaimed creator of the Maisy series and other popular children's books revamps eight classic stories, from Little Red Riding Hood to The Musicians of Bremen, retaining all the emotion and humor from the original fairy tales.

Beware — these fairy tales are not for the faint of heart! Maisy creator Lucy Cousins shifts gears to retell her favorites with vivid, rousing illustrations.Eight classic stories take on new energy as Lucy Cousins ramps up her artwork. In this bold, funny, and unflinching collection, the beloved author-illustrator retains all the emotion and humor of the original fairy tales: the heroes are courageous, the villains are horrible, and the children are tasty. With her sly, simple language and vibrant illustrations, even the scariest fiends become the stuff of shared hilarity and shivery thrills.