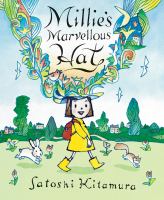 When Millie cannot afford the very expensive hat that she wants to buy, the owner of the shop comes up with an imaginative solution to her problem.

A work that celebrates the imagination, Kitamura's latest picture book features appealing illustrations and a message that's hardly subtle. The book's young heroine (looking like Madeline, another girl about town) begins the action by stopping to buy a feathered hat. She doesn't have a penny in her purse, but the salesman searches for the perfect hat. He brings out a box: "It can be any size, shape or color you wish. All you have to do is imagine it." The resulting hat parade showcases Kitamura's cheery, off-kilter images, including a peacock hat (not just a few feathers, but an entire, gigantic peacock), a cake hat (no fewer than 13 cakes high), and a fountain hat. Millie notices that everyone has a hat—a kangaroo hat here, an accordion hat there—and she even brightens up an old lady's "dark, murky pond hat." Back at home, she assures her mother that she has a hat, too: "You only have to imagine it!" The final page, featuring dad with a sizable penguin hat, is worth the didacticism. Copyright 2009 Booklist Reviews.

Whimsy drives both the text and airy watercolor art of Kitamura's (The Young Inferno) story of a girl with a creative and colorful imagination. Millie finds a fabulous feathered chapeau in an elegant shop, but has no money. When the accommodating clerk brings out an invisible hat that fits her perfectly, she reaches into her purse and gives him "all she had in it." Prompted by items she spies while walking, Millie imagines her hat to be a peacock, a stack of bakery cakes and a bouquet of flowers, among other things. Her imagination then turns outward and she notices that passersby are also wearing hats that slyly reflect their professions, passions and inner lives (a putting green for a businessman, a seal balancing a ball for a woman burdened with a pile of parcels, a pair of angry dinosaurs for two arguing boys). Sheer joyfulness leads Millie (and her hat) to sing on her way home, causing a riot of rainbows and animals to trail from her head. A cheerful tribute to a determined and optimistic imagination. Ages 4–8. (Sept.) [Page 63]. Copyright 2009 Reed Business Information.

K-Gr 3—When Millicent cannot afford the hat she sees in a store window, the clerk remembers that he has a special one that's perfect for her budget. This imaginary hat can be any size, shape, or color that she prefers. As she walks down the street wearing it, Millie is inspired. Soon she has a hat like a peacock, then a cake, next a flower, and then a fountain. In the park she discovers that everyone has a special hat. Back home she tells her parents all about her day and soon they too are sporting hats. Kitamura's idea and writing are solid, but his illustrations are not as successful as in his Duck Is Dirty (Farrar, 1996; o.p.) or UFO Diary (Andersen, 2007). For example, the store clerk is described as kindly but looks decidedly sour, and the cake hat is less than appetizing. Overall the book doesn't display a joyful burst of imagination.—Catherine Callegari, Gay-Kimball Library, Troy, NH [Page 127]. Copyright 2008 Reed Business Information.

When Millie cannot afford the very expensive hat that she wants to buy, the owner of the shop comes up with an imaginative solution to her problem.

Unable to afford the beautiful hats in a local store, Millie is encouraged by the shopkeeper to try a special hat while imagining its perfect shape and color, an endeavor that enables Millie's ability to see both her own unique hat and the wonderful hats worn by others.

Millie loves hats, but she can't afford to buy any of the beautiful ones in the hat shop. But the shopkeeper has an idea. He produces a box containing an amazing hat with the most perfect shape and color imaginable—if Millie dares to imagine it. Millie does dare, and soon she sees not only her own marvellous hat, but everyone else's hats as well.