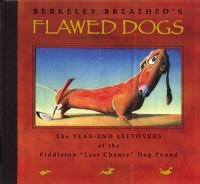 In this outwardly glib paper-over-board catalogue of homeless dogs, Breathed (Edwurd Fudwupper Fibbed Big) comments on people's mistreatment of animals. Trouble is, Breathed's flippant satire and visual hyperbole make an odd fit with his devotion to a worthy cause-the book may be best suited to adult dog lovers. According to the introduction, Piddleton, Vt., "Pop. 327 (People: 243)," is home to activist Heidy Strüdelberg, who once named a "shivering three-legged streetdog" best in show at Westminster and then founded the Last Chance Dog Pound, to give "the doomed and most desperate... a final try at getting adopted into a world that worships perfection." But that's all in the fine print. To a casual browser, the book is a rogue's gallery of unlovely pets. Barney, a tattooed hound, sits sadly at the grave of his departed owner, "Leo `Nardo' Davinski, 1922-2003, Tattooer to the Angels Now." Pepe, a cross-eyed Chihuahua, thinks he's as handsome as Richard Gere. Other charmers are flatulent or stick their heads up their owner's nostrils. Every spread includes a full-page color portrait, opposite which is a black-and-white mug shot picturing the lonely animal in a gray cement cell. The sentimental concluding image, a glowing Piéta holding a bandaged dog, laments that "Some live without love.../ That's how they're flawed." Despite this pro-adoption plea, none of the unfortunates finds a home, and the vaunted Piddleton shelter (if indeed it is the one pictured) looks as lifeless as a tomb. All ages. (Oct.) Copyright 2003 Reed Business Information.

Gr 2-5-A tongue-in-cheek parade of mongrels, mutts, and generally unadoptable dogs fills this catalog of the Piddleton "Last Chance" Dog Pound in Vermont. The introductory pages present a cast of heavily satirized human characters as well as a brief history of the shelter, "where the doomed and most desperate are sent- for a final try at getting adopted into a world that worships perfection." The following pages each feature a sad sack and often bizarre dog-too colorful, too gassy, too long, too hairy, likes to crawl up people's noses-and a brief rhyming verse that describes its unhappy past. The full-color acrylics are rendered with broad exaggeration, dark and slightly sinister tones, and a rubbery suppleness that tends toward the grotesque. A note at the end encourages readers to adopt at local shelters. Adults will best appreciate the satire though older children may enjoy the goofy humor and outrageousness of the poor unwanted pooches featured here.-Marge Loch-Wouters, Menasha's Public Library, WI Copyright 2003 Reed Business Information.

When a collection of loveable dogs finds no success with their original owners, they end up telling their sad tales at the "Last Chance" Dog Pound in Piddleton, Vermont while eagerly waiting for someone to give them a place to call home.

Accompanied by rhyming text, presents illustrations of of unloved dogs suffering from a variety of conditions and characteristics including crossed eyes, extra large tongues, and unusual gassy discharges.

From the Pulitzer Prize-winning creator of "Bloom County" comes the annual catalog of the fictional "Last Chance" Dog Pound, riotously depicting imperfect dogs that are available for adoption. Full color.

From the Pulitzer Prize-winning creator of "Bloom County" comes the annual catalog of the fictional "Last Chance" Dog Pound, riotously depicting imperfect dogs that are available for adoption. Full color.