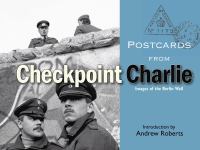 Between 1945 and 1961, an estimated 2.5 million people fled East Germany in search of the political and economic freedom offered by West Germany. To thwart this tide of defections, on the morning of August 13, 1961, hundreds of East German troops began erecting the Berlin wall—a barrier that would take nearly twenty years to complete and would eventually span 166 kilometers. In Postcards from Checkpoint Charlie, the Bodleian Library assembles a stunning collection of images to document the wall’s impact worldwide.The postcards in this fascinating volume trace the development of the wall—from its beginnings as a simple stretch of barbed wire to the daunting final structure made of concrete and containing over 300 watchtowers. The images capture scenes of tension and urgency, such as those at Checkpoint Charlie, where we see Allied and East German soldiers coldly observing one another through binoculars. Others document the wall’s ties with American history, including pictures of John F. Kennedy in 1963 when he declared his solidarity with all Berliners and a picture of Ronald Regan when he implored Mikhail Gorbachev to tear down the wall. Also included are images from the toppling of the wall, when thousands of joyful East Germans realized the fulfillment of their personal dreams and marked the conclusion of the cold war.An intimate look at one of the most visible manifestations of the postwar divide, Portraits from Checkpoint Charlie presents a key location in twentieth-century history through the eyes of those on the scene.