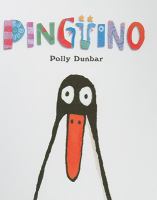 Lucas is delighted to receive a penguin for his birthday but Pingüino will not answer or respond to him in any way, no matter what Lucas does, until, at last, they discover the language of friendship.

When Lucas opens his present, he finds a penguin who just won t talk. Although Lucas tries tickling him and making him laugh, Pingüinono dijo ni una sola palabra (Penguin didn t say a single word). Frustrated, Lucas resorts to more drastic actions even trying to feed Pingüino to a passing lion. León, however, chooses to eat Lucas instead. The black-ink-and-watercolor illustrations of a thwarted toddler who finally learns to communicate with an impassive Pingüino are just as entertaining as the original. First published by Candlewick in 2007, this simple Spanish rendition is sure to resonate with impetuous Spanish speakers. Copyright 2009 Booklist Reviews.

Lucas receives a penguin for a birthday present, and, after he is unable to get the penguin to answer his questions, he resorts to gestures and loud noises which makes Lion very angry.