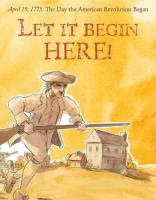 Provides an informative look at the events that lead up to this important day in history when American heroes took a stand against an oppressive monarch in order gain the freedom they deserved in the new land they worked hard to build.

*Starred Review* Brown distills the fairly complex story of the beginning of the American Revolution in a manner that deftly balances information and intrigue. He breezes through some of the underlying issues that led up to the conflict on both sides of the pond with economical precision ("King George and his advisors decided to lighten the burden on his empire by lightening the pocketbooks of the Americans") that highlights the history in a way that is neither too dense to be approachable, nor too simplified to be helpful. He then goes into a blow-by-blow account of the first day of fighting, following the many skirmishes that broke out around the colonies and liberally applying quotes from various officers and regulars alike. Equally impressive and vital to the success of this picture book are Brown's compositions that sometimes dramatically, sometimes whimsically intersect with the text, featuring sophisticated foreground and perspective shifts that pit Americans on one side of a spread against British on the other, bullets zipping across the fold. A bibliography, but unfortunately no source notes for the abundant quotes, concludes this rousing, accessible, and splendidly executed account of the opening salvos in our country's fight for independence. Copyright 2008 Booklist Reviews.

Brown, noted for his numerous picture-book biographies of lesser-known figures, here offers a slightly older audience "you are there"–style accounts of two signal dates in American history. Expert pacing, novelistic incorporation of quotations and well-observed but straightforward reportage draw readers into the action. He humanizes complicated ideas. For example, Let It Begin opens vividly as King George III wins the Seven Years' War: "Celebration was surely in order. But George could not celebrate," writes Brown, quickly explaining how Britain's war debt contributes to the start of the Revolution. Looking at the Titanic, Brown explains the causes of the disaster and, describing the passengers' and crew's behavior, finds the details that speak loudest (a passenger stuck on the sinking ship gives his life jacket to a woman boarding a lifeboat). His subtle watercolor-and-pencil compositions skillfully capture moments in the text—people's facial expressions; the blood of battle; rushing, roiling, icy water; as well as both the valiant and understated gestures of some of the actors. Top-notch. Ages 6–10. (Dec.) [Page 46]. Copyright 2008 Reed Business Information.

Gr 3–5— This attractive picture book opens with an introduction to the causes of the American Revolution. George III and his advisors looked for a way to relieve the monarch's war debt and decided to impose taxes on the American colonies. The colonists rebelled, but the real action started with Paul Revere's midnight ride and the "shot heard round the world," which plays out with a combination of accessible narrative and bloody realism in Brown's vivid, appealing watercolors. The central figures are sketched with interesting details: British Major Pitcairn bragged that "the whole banditti of Massachusetts will run away" if he showed them his sword, and American Captain Parker was "dying of tuberculosis." After the colonists' defeat at Lexington Green, the British marched to Concord and were beaten by a larger militia. An endnote describes the outcome of the war and the fates of the major players, including the King who "passed his last years raving mad and chained to a chair." Brown keeps the information flowing easily while getting the salient points across. His version is different enough from Dennis Brindell Fradin's book of the same name (Walker, 2005) for the two to exist peacefully together on the shelf.—Rebecca Donnelly, Loma Colorado Public Library, Rio Rancho, NM [Page 130]. Copyright 2008 Reed Business Information.

Provides an informative look at the events that lead up to this important day in history when American heroes took a stand against an oppressive monarch in order gain the freedom they deserved in the new land they worked hard to build.

ONE DAY THAT CHANGED A NATION A nonfiction master brings the start of the American Revolution to life.A 26-year-old King George II found himself in financial turmoil after crushing the French, Austrians, and Spanish in battle. Luckily money was no object since he could easily get it back by raising taxes on his American colonies...but what King George didn't realize was the colonies were beginning to have a mind of their own and had started to set their sights on freedom. The cast of characters includes those we know--the famous silversmith, turned messenger, Paul Revere--and many we haven't heard of like "Flinty Whittemore," a 78-year-old who fought off the British with a musket, two pistols, a sword, was bayoneted 14 times and still lived another 18 years to brag about it. Detailed, yet accessible, Don Brown's award winning nonfiction style brilliantly comes to life in this fascinating account of the start of the American Revolution.