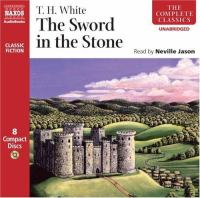 The sword in the stone

Neville Jason's approach, he says, is to be "humble to the material" he is working with and to let the "powers of absorption work." It is apt that in this classic retelling of the King Arthur legend, the wizard Merlin often teaches the boy Arthur (aka Wart) by changing him into other creatures—a fish, a bird—to learn by absorption, by being, with empathy being the least of the lessons taught. It is a perfect fit of sensibilities. Jason, who was awarded the Diction Prize by Sir John Gielgud at the Royal Academy of Dramatic Art, delivers fully developed characters with such warmth and spark that listeners are instantly transported to Sir Ector's castle. Originally written in 1938, this audiobook is perfect for any J.K. Rowling fan, as its humor, intellect and playfulness feels as contemporary as a Harry Potter novel. In fact, Rowling has described White's Wart as "Harry's spiritual ancestor." Combined with the brilliant performance by Jason, what more could a fantasy fan want? (Mar.) [Page 55]. Copyright 2008 Reed Business Information.

The humorous story of young Arthur's training to become king, under the guidance of Merlin the magician.