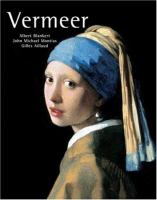 The works of 17th-century Dutch painter Johannes Vermeer have been much discussed and debated since their rediscovery in the 19th century. Here, two Vermeer scholars (Blankert and the late John Michael Montias) and a French artist (Gilles Aillaud) update and revise the text of a book originally published in Holland in 1975. In the four essays accessible to the nonspecialist and examining Vermeer's life and work, topics under discussion are preceded by clearly defined headlines. Full-color illustrations appear throughout. The essay "Vermeer and His Public" disputes the notion that Vermeer was a "neglected genius" in his lifetime. Other sections include a complete catalog with full provenance and color thumbnail reproductions of each of Vermeer's paintings; a full listing of all known documents pertaining to Vermeer and his family; a "Critical Anthology" consisting of excerpts from 19th- and 20th-century writings by, e.g., Marcel Proust referencing the artist; and a traditional chronology. The comprehensive inclusion of all the basic particulars related to the artist and his paintings gives the work extensive reference value. It can be pleasantly read cover to cover by art lovers, art students, and specialists alike. Highly recommended for most art book collections.—Ellen Bates, New York [Page 92]. Copyright 2008 Reed Business Information.

Vermeer could not have anticipated that The Girl with a Pearl Earring would make him a pop culture icon. This oversized art book paints a wide-ranging critical and historical portrait. Vermeer completed only 30-some paintings, which are beautifully reproduced in plates that celebrate every facet of these marvelous works. Other illustrations develop a rich context for the paintings, complementing three notable essays (following a brief introduction by the late French artist Aillaud). Blankert, a Vermeer expert at Utrecht University in the Netherlands, serves as eloquent docent in two essays, plus a catalogue that documents provenance to the present day. Montias, an expert in 17th-century Dutch politics and economics who died in 2005, combs the scarce records of 16th- and 17th-century Delft to conjure Vermeer's environment, drawing on primary documents—from marriage certificates to house inventories listing objects that often appear in paintings (also listed in a full appendix). Unlike many, neither Blankert nor Montias see Vermeer as a "neglected genius": he did well enough in his lifetime—or would have, if he hadn't had so many children and nefarious relatives. But as they do show, the artist's star rose through the 18th century, and the scholars, updating their 1978 British edition of this work, bring the story up to the present. 164 color and 35 b&w illus. (Oct.) [Page 51]. Copyright 2007 Reed Business Information.

Profiles the life and works of the distinguished seventeenth-century artist, analyzing him within the context of other artists of the period and examining his social origins and domestic environment and how they shaped his work.