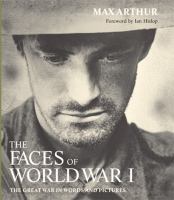 Faces of World War I

Photograph albums about the battles of World War II are not scarce, and neither are photo albums of the aftermath of battles fought in the American Civil War. Such albums covering World War I seem less available, however. That void is more than adequately filled by this new and riveting collection of photographs culled from such archives as London's Imperial War Museum. The focus of the photos gathered here is on soldiers from both sides in the conflict; the point is to individualize them, not necessarily with a name but with a face. Many faces register absolute terror, but in other instances, ironically yet understandably, soldiers laugh as they grasp a moment of relief from the horror of the battlefield. The anxious look of a soldier off to the front, saying good-bye to family, makes a sad parallel to the unmistakable look of death on another soldier's face. Accompanying quotations from eyewitness accounts further personalize the photos' impact. Copyright 2007 Booklist Reviews.

Photographs of combatants with brief quotations from officers and enlisted men portray WW I in trenches, military camps, and memorials. A brief chronology of military campaigns introduces a section on each of the war's four years. Most photographs, obtained from the Imperial War Museum in London, record British and Allied troops as well as some German forces. The book documents the daily life of soldiers at war and rest--eating their rations, occasionally shaving and showering, fighting lice, playing games, and struggling with boredom, exhaustion, anxiety, and other wounds to the body and mind. Many photographs detail the war's ever-increasing toll on soldiers, animals, and land. Unfortunately, journalist Arthur sheds no light on who took the photos or why the photographs were taken; whether the public saw any of them at the time; or which ones were published here for the first time. A useful introduction to the reality of the Great War, but readers will have to look elsewhere to understand the history of war photography in the early 20th century. Summing Up: Optional. Public libraries/general collections. Copyright 2008 American Library Association.

This magnificent commemorative volume traces the tragedy of the Great War in words and pictures. Best-selling author Max Arthur brilliantly conveys not only the heroism, but also the universal horror, futility, absurdity and boredom of early 20th-century warfare. From the frontline troops and the daily dance with death, to the support lines, communications, enlistment, training, and propaganda, the story of the war is illustrated with over 200 images that have been handpicked from the world famous collection of the Imperial War Museum in London. Every aspect of the soldier's life is covered in this brilliant collection of images and eyewitness accounts that bring the Great War to life once more.