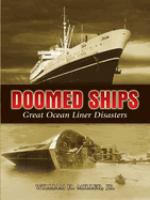 These true-life adventures unfold amid flames, collisions, and explosions, with frantic calls of SOS and a rush to clamber aboard the lifeboats. Naval historian William H. Miller, Jr., recounts the dramatic stories behind a host of ill-fated passenger ships. He takes readers beyond the newspaper headlines and formal inquiries, offering firsthand accounts of heroic rescues, daring escapes, and tragic losses.Starting with the torpedoing of the Lusitania in 1915 and concluding in 2005 with the capsize of the Oriana during a Chinese typhoon, these are the world's most ill-starred vessels: the Morro Castle, Normandie, Andrea Doria, Europa, and many other ships whose maritime lives ended in catastrophe (the Titanic has been omitted, since that disaster has been well documented elsewhere). Nearly 200 photographs, many from private collections, highlight a compelling blend of personal anecdote and historical record.

Nearly 200 photographs, many from private collections, highlight tales of some of the vessels whose pleasure cruises ended in catastrophe: the Morro Castle, Normandie, Andrea Doria, Europa, and many others.