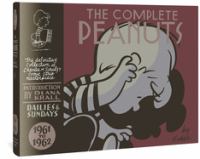 Collects the comic strip Peanuts, featuring the misadventures of Charlie Brown, Snoopy, and the rest of the gang, from 1961 to 1962.

At the start of the 1960s, Schulz had entered into a satisfying routine of putting his beloved characters through their annual paces. Charlie Brown's baseball team went down to perpetual defeat in the summer, Linus vainly awaited the Great Pumpkin and Lucy pulled the football in the fall, and Schroeder celebrated Beethoven's birthday in the winter. These strips introduce Frieda, the girl with "naturally curly hair," sadly destined to remain a second-stringer, and for a brief period in them, Linus sports eyeglasses. Singer Diana Krall contributes a heartfelt introduction. ((Reviewed November 1, 2006)) Copyright 2006 Booklist Reviews.

Collects all the "Peanuts" comic strips as originally published in newspapers, including both daily and Sunday strips.

Features more than seven hundred color and black-and-white strips including several that have not been collected since their original publication, in a volume that covers the period during which Sally prepares to start kindergarten, Lucy and Linus battle over the security blanket, Snoopy copes with a family crisis involving a little family of birds, and more.

Launching into the 1960s, Schulz adds another new cast member. Two, in fact: The obnoxious Frieda of "naturally curly hair" fame, and her inert, seemingly boneless cat Faron. The rapidly maturing Sally, who was after all just born in the previous volume, is ready to start kindergarten and not at all happy about it. Lucy and Linus' war over the security blanket escalates, with Lucy burying it, cutting it apart, and, in the longest sequence of the book, turning it into a kite and allowing it to fly away. Aauugh! In fact, Linus' life is particularly turbulent in this volume, as he is forced to wear glasses, sees the unexpected return of his favorite teacher, Miss Othmar, and coaxes Sally into the cult of the Great Pumpkin (with regrettable results).Snoopy, meanwhile, becomes a compulsive water sprinkler head stander, unhappily befriends a snowman or two, and endures a family crisis involving a little family of birds. (Woodstock—the bird, and the music festival, for that matter—is still a few years away.) And in one of the strangest continuities in the history of Peanuts, the (off-panel) Van Pelt parents acquire a tangerine-colored pool table and become obsessed with it! Plus baseball blowouts (including a rare team victory), Beethoven birthdays, plenty of dubious psychiatric help for a nickel, and an introduction by Diana Krall.