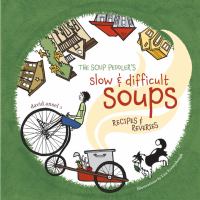 The soup peddler's slow and difficult soups Recipes and reveries

Ansel's entertaining book is about delivering soup, the perfect communal food, in his adopted, tightly knit Austin, TX, community of quirky comrades and archenemy ice cream men. After spontaneously quitting his software development job, the author emailed friends and neighbors saying he'd personally bring them some soup for $10. This is the story of his second season delivering soup on "Old Yellow" (a bike and trailer customized from scraps). A clever storyteller, Ansel combines the traits of food writer Ruth Reichl, humorist David Sedaris, and urban journalist Kathleen Hirsch, who wrote beautifully about neighborhoods in A Home in the Heart of a City . Amidst the memorable stories of his offbeat clientele are about 40 recipes, some down-home, others exotic, none particularly difficult. The title pays homage to the slow food movement since Ansel's soups are handmade and delivered by pedal power. Currently in his fourth season and serving over 700 customers, Ansel has been featured on the Food Network and in the Christian Science Monitor . Highly recommended for all public libraries.--Bonnie Poquette, Boerner Botanical Gardens Lib., Milwaukee [Page 169]. Copyright 2005 Reed Business Information.

Offers a collection of soup recipes for the months of September through June.

With just a yellow bike, a used trailer, and a few two-quart containers of homemade gumbo, David Ansel began peddling soupto his friends and neighbors in the free-spirited community of Bouldin Creek in Austin, Texas. He dubbed his loyal customers "Soupies," and as word of his grassroots soup service spread, his delivery roster grew into a veritable Cult of the Bowl.THE SOUP PEDDLER'¬?S SLOW & DIFFICULT SOUPS is David'¬?s heart- and belly-warming story of his first soup season peddling to the slacker-philosophers, artist-activists, and celebrity-eccentrics of Bouldin Creek. On his route, you'¬?ll meet a cross-dressing mayoral candidate, a radical coterie of plant liberators, a scheming ice cream man, and Alex the Wonder Dog, among others. To season his stories, David shares 35 of his most popular soups, with eclectic recipes like South Austin Chili, Alaskan Salmon Chowder, Smoked Tomato Bisque, Schav (Jewish sorrel soup), and Ajiaco (Colombian chickencornsoup).A loving homage to the art, science, and joy of soup, and a taste of simpler times in our modern fast-food nation, SLOW & DIFFICULT SOUPS is a rousing reminder of our basic need to connect to our food-and those who cook, deliver, and slurp it.Reviews:"How could you not love a book by a Jewish boy from Texas that combines thoughts about fudgecicles, Baptist preachers, dogs, and a band called the Barbecuties with soups from Austin, Algeria, Armenia, and just about every place in between? Great recipes and a great read."-Ari Weinzweig, cofounder of Zingerman'¬?s"David has produced a book full of insightful, personal stories and well-crafted recipes. SLOW & DIFFICULT SOUPS provides the reader with a front row seat to his unique culinary adventure."-John Campbell, creator of Central Market"SLOW & DIFFICULT SOUPS is filled with the sense of community David and his business embody; it shows us how the slow food movement is meant to be lived."-Steven Bercu, CEO of BookPeople"Reading these tales is like following David on his bike as he brings his soups to the people of Austin. He'¬?s a first-class storyteller and one helluva soupmaker."-Joan Nathan, author of Jewish Cooking in America