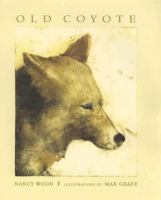 Realizing that he has come to the end of his days, Old Coyote recalls many of the good things about his life.

K-Gr. 3. Once a swift and fearsome young male, Old Coyote now roams the Southwest with a broken stride and a whitened muzzle. As the coyote walks familiar territory, he reflects upon his long and bountiful life. He acknowledges the old saguaro cactus that gave him shade and the sun that offered warmth, and he thinks fondly of the den beneath the large pine tree, where he and Mrs. Coyote admired many sunsets. Finally, knowing his time is near, he bids good-bye and sets off on the solitary journey all living things must make: "Old Coyote found a perfect rock. He curled up and closed his eyes. He dreamed of running so fast nothing could catch him . . and finally, he dreamed his way into a whole new world." Wood's sensitive narrative serves as a gentle introduction to a potentially difficult subject, and Grafe's mixed-media, earth-toned illustrations beautifully capture the essence of it all. ((Reviewed December 1, 2004)) Copyright 2004 Booklist Reviews.

Gr 1-3-Old Coyote is nearing the end of his days. As he walks familiar paths, he remembers the wide open spaces before the city crept toward his home. He recalls a time when "his howl was so loud that even the earthworms up on the mountain could hear it." He can't run anymore, so he walks, even though his bones ache. He pauses for a rest beneath the old saguaro cactus and continues toward home, greeting Father Sun on his way. Finally, he arrives at his den where he and Mrs. Coyote share some tender moments. With the light from the full moon to guide him, Old Coyote heads out toward a gathering spot where he says good-bye to his animal friends. Climbing slowly to the top of a mountain, he lies down and falls asleep. All the while he is dreaming of golden days gone by, until at last he "[dreams] his way into a whole new world." This gentle and sensitive story is delivered in just the right respectful manner without being maudlin. Grafe's mixed-media illustrations were done in muted shades of brown and blue. The drawings are somewhat impressionistic, mimicking what might be seen by Old Coyote's aging eyes. A comforting tale that is suitable for helping to explain death to young children.-Roxanne Burg, Orange County Public Library, CA Copyright 2004 Reed Business Information.

Offers a touching tale about the cycle of life and making an effort to say good-bye as Old Coyote prepares for his departure from this life while reminiscing warmly about his younger years that had been filled with raising pups, chasing rabbits, and howling at the moon from the mountain tops.

Realizing that he has come to the end of his days, Old Coyote recalls many of the good things about his life.

With simple beauty, Nancy Wood tells a loving story about a wise creature's last day, illuminated with masterful illustrations by Max Grafe.Old Coyote's muzzle is turning white, and his steps are slow. He spends most of his time basking in the sun and remembering. Chasing rabbits, raising pups with Mrs. Coyote, gathering with his friends on the mountain and howling at the moon — it's been a long, full life, and he's grateful for it. But could it be time for him to take one last journey?