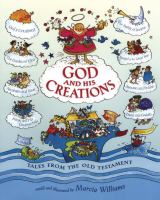 God and his creations Tales from the Old Testament

K-Gr. 2. In previous adaptations of classics (Tales from Shakespeare, 1998), British cartoonist Williams offered youngsters a faithful interpretation of a sophisticated text and humor, with explanations that made the story accessible. Many children will recognize the tales here, which include the story of the Creation, Noah's Ark, and David and Goliath, but this time out, the artwork, accomplished with good-natured silliness, seems simply to illustrate; it doesn't offer additional information to children who don't know the material. The artistic details, however, are wonderfully clever as they flow from Williams' pen and paintbrush. The Mediterranean and Egyptian peoples are pictured with appropriate skin tones, and the serpent and angels, who inhabit the page borders and provide numerous asides, run the gamut from rainbow hued to curly blonde to balding. One detail will play well with Harry Potter-besotted readers: a Golden Snitch-inspired toy meant for a game called "orb ball." This book won't stand alone as an early introduction to the Old Testament, but it's a solid additional offering. ((Reviewed March 15, 2004)) Copyright 2004 Booklist Reviews.

Bringing her trademark comic-book style to the Bible, Williams (Joseph and His Magnificent Coat of Many Colors) may once again have readers smiling at the Old Testament. Here she offers taut and trenchant renditions of Creation, the Fall, Moses, Daniel and the lions' den, and seven other favorite scriptures. As the stories unfold in panels, angels look on from the margins ("He's beat," says one, grinning indulgently as roly-poly, white-bearded God stretches out to snooze on a cloud on the seventh day of creation), where the serpent joins them after he is chased from Eden (he cheers on the wicked). One fine instance of Williams's comedy can be found in the tidy, 40-panel page she creates as part of the Noah's Ark story: readers see the Ark tossed upon the waters, hearing only the animals' complaints from panel to panel about the endless diet of hay ("wet hay," "dry hay," "leftover hay," etc.). Williams works in graver issues, too. When Abraham leads Isaac to be sacrificed, one of the observing angels says, "I blame Adam and Eve," and another replies, "I blame the serpent." While she shows God righteously angry (causing the Flood, enraged at Jonah), essentially her God is not only lovable but adorable, his pockets stuffed with stars and small friendly creatures. The wit, the snappy pace and wry details should easily engage the target audience. Ages 8-12. (Mar.) Copyright 2004 Reed Business Information.

K-Gr 5-Williams presents 11 Bible stories in an engaging comic-strip format. Her now-familiar approach, applied to tales as diverse as Robin Hood, Greek myths, King Arthur, and the works of Shakespeare, places the main characters and their deeds within sequential frames of varying sizes. Done in watercolor and ink, the illustrations are colorful and filled with humorous touches. There are several pages per story; the book begins with "God's Creations" and "The Garden of Eden" and concludes with "Daniel in the Lions' Den" and "Jonah and the Great Fish." Angels and the serpent comment on the action from the borders. An introductory note points out that God's script comes directly from the New International Version of the Bible and that the rest of the text is invented, but inspired by that translation. Traditional bones of contention, such as nudity and Eve's role in The Fall, are sensitively handled. Humorous, succinct, and rooted in traditional elements, this offering is sure to be popular where Bible stories are in demand.-Wendy Lukehart, Washington DC Public Library Copyright 2004 Reed Business Information.

Retells the exciting adventures of Adam and Eve, Noah, Moses, David and Goliath, and many other Old Testament characters in a compelling, comic-strip style. By the creator of Bravo, Mr. William Shakespeare!

Behold! Marcia Williams retells the exciting adventures of Adam and Eve, Noah, Moses, David and Goliath, and many more Old Testament characters in her compelling comic-strip style.In the beginning there was only God . . . and then He started creating! The last and most troublesome of all God’s creations were men and women — and, as these wondrous tales reveal, God was forever having to give them a helping hand. Only the inimitable Marcia Williams, with her energetic narratives, voluminous illustrations, and gently humorous details, could make these Old Testament tales so vibrantly accessible to young readers. Certain to spark new interest in the original stories, GOD AND HIS CREATIONS is a heavenly creation indeed.