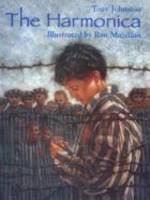 Torn from his home and parents in Poland during World War II, a young Jewish boy starving in a concentration camp finds hope in playing Schubert on his harmonica, even when the commandant orders him to play.

Gr. 3-6. Based on a true survivor story, this powerful picture book is yet another astonishing Holocaust account for discussion. A Polish Jewish child, blissfully happy with his loving parents, gets a harmonica from his coal-miner father and learns to play Schubert while his parents dance. The realistic mixed-media, double-page illustrations contrast that glowing warmth of home with the darkness that comes when Nazi soldiers break down the door, separate the boy from his family, and send him to the camps. His harmonica becomes his solace. The commandant hears about the child's playing. He orders the boy to play Schubert and throws him bread. In the end, however, the music does nothing to humanize the brutal Nazis. In fact, one unforgettable picture shows the commandant blissfully listening to the music, one hand over his heart and the other holding a whip. The home memories are idyllic, but there's absolutely no sentimentality about the child's survival. Johnston gives children and grown-ups lots to talk about here--for example, Can a person be both sensitive and cruel? ((Reviewed January 1 & 15, 2004)) Copyright 2004 Booklist Reviews.

Gr 3-6-Inspired by the story of a Holocaust survivor, this exquisite picture book is poignant and powerful. Simple sentences charged with delicate word choices briefly recount the first-person narration of a poor but happy boy and his parents in Poland who were captured, split up, and taken to concentration camps. The youngster manages to take with him the harmonica his father gave him, on which he plays Schubert. The commandant of the camp learns of his talents and orders him to, "Play, Jew!" The boy complies-and finds out that the whole camp hears him and takes heart from the music. The mixed-media illustrations change from a warm to cold palette to underscore the move from home to camp. While the story is set in World War II, the theme is broader, and makes a case for the power of music/art to support and sustain humanity. There is an appended note about the life of Henryk Rosmaryn.-Cris Riedel, Ellis B. Hyde Elementary School, Dansville, NY Copyright 2004 Reed Business Information.

Torn from his home and parents in Poland during World War II, a young Jewish boy starving in a concentration camp finds hope in playing Schubert on his harmonica, even when the commandant orders him to play.

When the Nazis invaded Poland, a family is split apart. The parents are sent to one concentration camp, their son to another. Only his father's gift, a harmonica, keeps the boy's hopes alive and, miraculously, ensures his survival.Tony Johnston's powerful story, inspired by the life of a Holocaust survivor, is enhanced by Ron Mazellan's luminous artwork.A testament to the human spirit and the transcendent power of music.