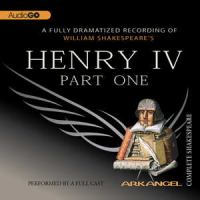 While King Henry's England is threatened by rebellion, the king's scapegrace son Hal haunts the taverns of London, his companions a crew of rogues and thieves led by the dissolute knight, Sir John Falstaff. The Earl of Northumberland and his fiery son Hotspur scheme to overthrow the crown. Can Hal be brought to a sense of duty as Prince of Wales?

This definitive collection features all 38 of Shakespeare's plays in their entirety, presented by outstanding Shakespearean performers.