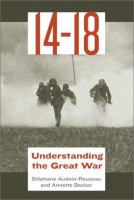 It seems impossible to escape the legacy of World War I. The collapse of Communist regimes in eastern and Central Europe certainly removed one odious legacy of that conflict. Yet that collapse triggered a resurgence of the extreme nationalism and interethnic hatreds that were both a cause and a result of the war. Audoin-Rouzeau and Becker have written extensively on the causes, course, and effects of the war. Here they have written a reappraisal of both the nature and the effects of the war that is striking and likely to evoke considerable controversy among both historians and laymen. They begin by examining the sheer and unprecedented violence of the war, during which many of the previous restraints were dropped. They emphatically assert that the responsibility for this violence must be placed on ordinary soldiers as well as on the easy target, the "leaders." They proceed to explore the role of a "crusading" spirit in generating enthusiasm for the war among the populace. The authors reject facile efforts to portray gullible lambs led to slaughter; rather, war enthusiasm seems to have bubbled up from below, and there were strong sentiments on both sides to "exterminate" the enemy. Finally, the phenomenon of mass mourning as a reaction to the scale of death is suggested as a constant strain in European consciousness over the past nine decades. This is an important and provocative work that offers new perspectives on a seminal conflict. ((Reviewed December 15, 2002)) Copyright 2003 Booklist Reviews

To the modern world, the doomed generation of 1914 is usually understood by the words Alistair Horne (The Price of Glory: Verdun 1916, 1962) put into the mouth of a 1960s Frenchman: "They must have been crazy, those people!" Now, two of France's leading historians of the Great War, Audoin-Rouzeau (Univ. of Picardy) and Becker (Univ. of Paris-Nanterre), have written a fresh and revealing portrait of the mentalites that incubated and sustained the conflict: the cult of violence and its impact; the unleashing of a nationalism of such virulence that words like chauvinism or jingoism scarcely explain its raging power; and the oceans of grief that fueled wartime attitudes and whose vestiges still brood over Western civilization's memory. The result was a new brutality in war and a process of brutalization that impacted civilians almost as much as soldiers. Ignoring these "mindsets," especially the experience of combat violence, has fundamentally distorted our understanding of the war. While centered on the French and German experience, the volume brilliantly and succinctly justifies its subtitle, "Understanding the Great War." Summing Up: Essential. All collections and readership levels. Copyright 2003 American Library Association

Directors of the Historial of the Great War in Peronne, France, the authors have written an innovative work concerning some neglected aspects of World War I. Breaking with historiography of the past, the authors take an anthropological approach to the cataclysm that engulfed Europe in 1914 and examine three significant aspects of the war: violence, crusade, and mourning. Never before in the history of warfare had there been so much physical violence. Violence not only on the battlefield but also in the cities and towns affecting civilians. The concentration camp phenomenon was also a part of this level of violence. The Great War was also a crusade for all countries involved. Nationalistic and racist attitudes against the enemy are thoroughly discussed. Millions of deaths were caused by the war, creating a collective mourning and personal bereavement for the survivors. Supported by contemporary documentation, this unique work will become a classic study. Recommended for all collections.-David Lee Poremba, Detroit P.L. Copyright 2003 Cahners Business Information.

Over the last 15 years, French scholars have produced a body of research that has fundamentally altered the history of WWI, though much of the work remains largely unknown in the U.S. The authors, directors of the French Museum of the Great War, draw on much of that work and see the war through three transformative, overlapping lenses: violence, crusade and mourning. In a striking contradiction to current U.S. historians' approaches, the authors assert the necessity of battle history-not as a techno-historical end in itself, but as source material for a richly textured analysis of the interrelated effects of violence on soldiers and civilians alike, culminating in a discussion of the way the confinement of military prisoners and the widespread internment of civilians combined to institutionalize a "concentration-camp phenomenon that would reemerge two decades later in far more sinister contexts." Further, when the combatants began by defining the war in patriotic terms, as a war of national defense, it became a crusade. Patriotism escalated into a perception of the conflict as between civilization and barbarism, a dichotomy accompanied by crude hatreds and reflexive dehumanization of the enemy, fueled by the experiences of military occupation, and by the myths (or what we might now call "urban legends") produced by it. The final consequence, the authors argue persuasively, was the development of full-blown eschatologoical expectations-that the war would really prepare the way for God's dominion on earth. The resulting disillusion opened the way for individual and collective mourning as the bereavements caused by war finally sank in. Disillusion, however, also opened the path to even higher levels of violence to force achieve the frustrated messianic ends. In the final analysis, the authors suggest, the Great War left a dual legacy-grief and totalitarianism. (Dec.) Copyright 2002 Cahners Business Information.

A challenging new analysis of the "Great War" looks deeply into the swirling quagmire of violence, racism, and grief stirred up by the war and traces the influence of these strong emotions on the course of European history. 10,000 first printing.

An analysis of the Great War looks deeply into the swirling quagmire of violence, racism, and grief stirred up by the war and traces the influence of these strong emotions on the course of European history.

This book shows the Great War was the matrix on which all subsequent disasters of the twentieth century were formed. Stephane Audoin-Rouzeau and Annette Becker examine three neglected but highly significant aspects of the conflict, each of which changed national and international affairs forever.First, the war was unprecedented in its physical violence and destruction: Why was this so? What were the effects of tolerating it for four long years? Second, not just the soldiers but also the citizens of all the belligerent states seemed motivated and exalted by a vehement nationalistic, racist animus against the enemy: How had this "crusade" mentality evolved? Did it ever dissipate? Third, with its millions of deaths the war created a tidal wave of grief, since tens of millions of people worldwide were bereaved: How could the mourners come to terms with the agonizing pain? These elements, all too often overlooked or denied, are the ones we must come to grips with if we are ever going to understand the Great War.

Audoin-Rouzeau (U. of Picardy Jules Verne) and Becker (U. of Paris X-Nanterre) are directors of an international museum on World War I at the Chateau de PTrone. In light of renewed interest following the 80th anniversary, they explore how it lay the foundation on which subsequent conflicts of the 20th rose. +ditions Gallimard published the original 14-18, retrouver la Guerre in 2000; the English translation was published in 2002 by Profile Books in Britain with the dates expanded. Annotation c. Book News, Inc., Portland, OR (booknews.com)

A bold new assessment of how the violence, racist nationalism, and grief aroused in 1914-18 changed the course of history To many, the years of the Great War seemed to signal Europe's collective suicide. A century later, the conflict continues to dominate the imagination of the West--not least because it became the matrix from which all subsequent disasters emerged. The authors of 14-18: Understanding the Great War have set aside the overly familiar scholarly tasks--assigning responsibility for the war, accounting for its battles, assessing its causes--and instead examine three neglected but highly significant aspects of the conflict, each of which changed national and international affairs forever. First, the war was unprecedented in its physical violence: Why was this so, and what were the effects of tolerating it? Second, each side seemed motivated and exalted by a vehement nationalistic, racist animus against the enemy: How did this "crusade" mentality evolve, and what did it mean for Europe and the world? Third, with its millions of deaths the war created a tidal wave of grief: How could the mourners ever come to terms with the agonizing pain? These are the elements that are vital to understanding the Great War. With its strikingly original interpretative strength and its wealth of compelling documentary evidence drawn from all sides in the conflict, this innovative work has quickly established itself as a classic in the history of modern warfare.