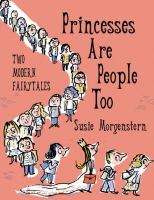 In the first story, Princess Yona and her parents slowly adapt to a world in which people seem to think that royalty belong only in books. In the second, Princess Emma doesn't care how handsome or rich a prince is, if only he can scratch her back until the terrible itch stops.

Gr. 2-5. Two playful fractured fairy tales, translated from the French and set in the present, make up this small chapter book that sets the pleasure of being ordinary against the restrictions of being privileged and apart. In "Even Princesses Have to Go to School," the isolated child is sick of being told, "Don't forget, you're a princess," and she fights to go to school. Bloch's occasional ink drawings show her stumbling around the schoolyard in her hoopskirt and crown, but she eventually catches on and learns that all parents tell their daughters they are princesses. The other story, "Someday My Prince Will Scratch," is a broad, slapstick mockery of romantic traditions. The princess yearns for a beau who knows just where to scratch her back. The fun is in the details and the wry cartoon-style illustrations, which could get grade-schoolers writing their own versions of living happily ever after--more or less. ((Reviewed May 1, 2002)) Copyright 2002 Booklist Reviews

Morgenstern (Secret Letters from 0 to 10) offers two slim stories that mildly tweak fairy-tale notions of princesses and princesshood. The first and more successful entry, Even Princesses Have to Go to School introduces Princess Yona, only daughter of a king and queen who have fallen on hard times (and who seem to have nothing to say except Don't forget you're a princess!) Perpetually bored, Yona is delighted when her parents sell their dilapidated 57-room castle and move to a three-room apartment; their new palace, she notes happily, has hot and cold running water and a flush toilet, while the best part was their noisy neighbors.... Yona could practically follow an entire television show one of her neighbors was watching. The setup is wittier than the plot, which has to do with Yona's desire to attend school, and the message here that all little girls are princesses in their father's eyes, is straight out of A Little Princess. The second story, Someday My Prince Will Scratch, follows Princess Emma's search for a prince who will satisfactorily scratch the annoying itch in her back. Its humor hinges on insults based on the suitors' names (Go jump in the lake, Drake!; You're a rat, Pat), and while this approach may appeal to some readers, others may tire of it quickly. Final art not seen by PW. Ages 8-12. (May) Copyright 2002 Cahners Business Information.

Gr 3-5-Two lighthearted, whimsical tales. In the first, Princess Yona wants to attend regular school just like all the other children. Convincing her parents takes some doing, though-they think that school isn't the proper place for genuine royalty. But convince them she does, and as they supply her with the things she needs they find that they also enjoy doing everyday things, such as shopping in a mall. The second story finds Princess Emma afflicted with a terrible itch. She has to endure dreadful dances and dates with unsuitable princes until she finds one who will properly scratch her back. Both of these stories are told tongue-in-cheek with a quirky look at what it means to be a princess today. Yona's family has fallen on hard times and must sell their castle and move into a three-room apartment, and Emma's suitors include a lawyer prince, an engineer, a scholar, a magician, and a poet. Humorous black-and-white cartoon illustrations accompany the stories.-Terrie Dorio, Santa Monica Public Library, CA Copyright 2002 Cahners Business Information.

In the first story, Princess Yona and her parents slowly adapt to a world in which people seem to think that royalty belongs only in books. In the second, Princess Emma is uninterested in whether a prince is rich or handsome but only if he can successfully scratch away the terribly itchy spot in the middle of her back.Although they are princesses, two stories show Princess Yona and Princess Emma have troubles of their own.

Two hilarious, contemporary fairy tales follow two very different princesses--Princess Yona, who longs for an ordinary life, and Princess Emma, who wants to find her own version of Prince Charming--who overcome their royal challenges with strength and humor.