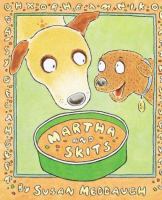 Martha watches as the new dog her family brings home grows through all the troublesome phases of being a puppy, and even though he does not develop Martha's ability to speak, Skits displays his own unique talent.

Ages 4^-7. Martha the talking dog returns in a fifth installment, this time with a new "brother"--puppy Skits. She enjoys the chaos Skits causes until the pup overturns her alphabet soup, which enables her to talk. The letters enable her to speak, the family waits eagerly for Skits to down the soup and start yapping too, but nothing happens. As Martha's owner says, "I guess two talking dogs were too much to expect." Skits knows he's not special like Martha, but his gloom is diminished by his favorite avocation, catching flying items like Frisbees. One day, while chasing a bug, Skits gets lost (now he really wishes he were like Martha so that he could phone home). The family is distraught until Martha realizes that Skits is sure to show up at the Frisbee-catching contest. Skits arrives, wins the golden Frisbee, and finds his own place in the family as an overachieving canine. This has all the fun that children have come to expect from Martha's appealing adventures, complete with humorous asides and energetic illustrations. The ending is not unexpected, but it may remind listeners that each member of a family is somebody special. ((Reviewed June 1 & 15, 2000)) Copyright 2000 Booklist Reviews

In this fifth Martha adventure, the talking dog hears a phrase well known to middle-aged pets: "Meet your new brother." Martha's owners introduce a brown puppy, Skits, who chews random household objects, attacks the vacuum cleaner and launches himself upon "anything airborne." ("Bad dog!" shout the humans, echoing the key line in Martha Walks the Dog, while Martha looks on in fond amusement.) Martha and Skits become friends, although Martha asserts "alpha dog" status when Skits spills her alphabet soup, the potion that enables Martha to speak. Martha wonders why the soup doesn't grant Skits the same ability ("Martha worried about Skits's brain. Was it too small?"), until she discerns that his talents lie elsewhere. Using her customary combination of deadpan commentary, comical voice-bubble asides and witty drawings, Meddaugh takes an accurate look at puppy behavior. It's almost a shame when, with the flick of a page, Skits transforms from big-eyed, charmingly stupid youngster to oversize lummox. Yet the gangly, full-grown Skits dashing headlong into big trouble provides an amusing contrast to tawny-coated, plump and pragmatic Martha. Meddaugh gently shifts the weight of the book away from Martha and onto the two dogs as a team. Her fitting addition to Martha's family acknowledges time's passage, invigorating both her canine heroine and her series. Ages 4-8. (Sept.) Copyright 2000 Cahners Business Information.

PreS-Gr 3-Fans of this talking dog will be charmed by this story about the new puppy that comes into the family. Martha is amused as Skits chews and destroys household goods with puppylike zeal, but she is quick to establish order when Skits spills her dish of alphabet soup. When the newcomer is old enough to try speaking, he is at a loss for words and feels badly, until Martha and their family assure him that he should be proud of his unique ability to catch flying objects. Meddaugh's bright cartoon illustrations are loving and playful, and prompt several laugh-out-loud moments. Dialogue balloons extend the simple, engaging narrative, and may inspire reader's theater. Preschoolers will identify with many elements in this story that also has enough sophistication to appeal to the early elementary crowd, and adults will appreciate its gentle message of acceptance.-Laura Scott, Baldwin Public Library, Birmingham, MI Copyright 2000 Cahners Business Information.

Surprised by the arrival of the exuberant puppy Skits, older dog Martha weathers the initial chaos but eventually loses her temper, insisting that the younger dog be calm and docile like herself. 25,000 first printing.

Martha watches as the new dog her family brings home grows through all the troublesome phases of being a puppy, and even though he does not develop Martha's ability to speak, Skits displays his own unique talent.

Martha’s family has a little surprise for her — a puppy. Martha’s world is turned topsy-turvy as she attempts to adjust to Skits, the exuberant, unabashed addition to the household. After the initial chaos, all seems to be going along quite smoothly until Skits does the unforgivable — crashes into Martha’s bowl of alphabet soup, spilling it everywhere. Martha decides she can no longer just watch from the safety of her chair. She must take charge and lay down the law for the pup. But when the family insists that Skits be more like Martha, something terrible happens! It’s up to Martha to help Skits realize just how special he is.