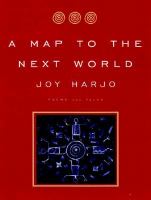 A map to the next world Poetry and tales

One of the most significant American Indian poets here expands her poetic practice to include what she calls tales but might as easily be considered prose poems. Harjo's verse has lately taken on a flowing, narrative quality; these tales, by contrast, take an imagistic, stream-of-consciousness form. Sometimes a poem and a tale reflect the same genesis in Harjo's life; such pairs are intriguing for what they suggest about Harjo's assessment of the prospects and limitations of prose and verse. As her admirers will expect, Harjo continues to examine the place of Indian people and Indian spirituality today. More than ever, she emphasizes family and community bonds and the way community can tie us to the natural world. "I am linked to my father, my son, my daughter. We are relatives of deep water," she proclaims. "I hear relatives' voices in the wind as we gather for the reckoning. I carry fire in my hands to the edge of the water." Written with authority and Harjo's trademark exploratory verve, this is fine, mature work. ((Reviewed February 1, 2000)) Copyright 2000 Booklist Reviews

Weaving together myth, generations-old stories and other souces of cultural memory, Harjo (The Woman Who Fell from the Sky; In Mad Love and War; etc.) explores the complexities of identity in a people still haunted by its violently disrupted past. (Harjo is a member of the Mvskoke or Creek Nation.) A facing-page dialogue between poetry and prose, the absorbing long poem "Returning from the Enemy," attempts to reconcile memories of the poet's absent father with memories of her own children, of ancestors and of "each trigger of grass": "We want to know if it's possible to separate and come back together, as the river licking the dock merges with the sea a few blocks away.// Long-legged birds negotiate the shore for food.// I am not as graceful as these souls." At its best, Harjo's map reveals regenerative human cycles that occur even in the midst of the most oppressive histories, with irreconcilably different worlds illuminating each other: a violent mugging becomes an encounter with the Navajo twin monsters; a fake snake set up to scare neighborhood birds becomes a fable of wisdom and perseverance. The more straightforward political critiques can be blandly accusatory: "Why have I come here/ I asked the dark, whose voice is the roar of history as it travels/ with the thoughts of humans who have made the monster." But Harjo's exploration of her layered selves reveals an identity of multiple influences, memories, obstacles and experiences. (Feb.) Copyright 1999 Cahners Business Information.

The poet author of The Woman Who Fell from the Sky draws on her own Native American heritage in a collection of lyrical poetry that explores the cruelties and tragedies of history and the redeeming miracles of human kindness.

This is more than a book of poetry. Joy Harjo travels through many worlds, across many boundaries. Mvskoke tribal song and storytelling, Navajo and Hawaiian philosophies, the music of the Middle East, and the poetry of western civilizations can all be heard in these songs and stories that bear witness to the cruelties of history and the miracles of human kindness at the border between this century and the next.