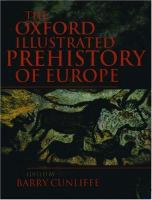 The Oxford illustrated prehistory of Europe

YA?Forty-five color plates, numerous black-and-white photographs, and a quantity of clearly drawn maps and illustrations enliven this thorough examination of ancient Europe. The earliest humans discussed date from around 700,000 years ago. The book ends with the migrations that marked the beginning of Medieval Europe around A.D. 600. In between are chapters on pre-agricultural peoples; the development of agriculture; advances in metal working; the emergence of complex, urban-oriented groups; the rise and fall of the Greek and Roman cultures; and the advent of post-Roman Europe. The 11 authors, all associated with universities in Great Britain, dispel many stereotypes about early humans with the latest archaeological and anthropological information on early technology, communal life, and development of trade. Throughout the account, they are careful to state which conclusions are more concrete and which are more speculative. Also found throughout is a pattern of linking developments in human culture to geographic and environmental factors. The book ends with an extensive index and a well-organized narrative outlining ``Further Reading.'' This section is, in itself, interesting reading. YAs with advanced reading skills who want to steep themselves in a scholarly investigation of one region's earliest human developments will find this volume satisfying and enlightening.?Carolyn E. Gecan, Thomas Jefferson Sci-Tech, Fairfax County, VA

Traces the evolution of man through Europe from 700,000 years ago to A.D. 600, discussing the developments in agriculture and metal working, the establishment of complex urban-oriented groups, and the rise and fall of the Greek and Roman cultures

A comprehensive history, ranging from the Stone Age to the barbarian world at the fall of the Roman Empire, compiled by a team of experts, includes hundreds of spectacular photographs of artifacts and artwork and incorporates the latest archaeological findings.

When a melting Swiss glacier recently revealed the body of a hunter millennia old, the world sat up and took notice. Here, in his well-preserved arrows, tools, and leather garments (not to mention his own remains) was a rare glimpse of life in prehistoric Europe, and it captured the publicimagination. Elsewhere more obvious remnants of the pre-classical past have long been objects of fascination: the megaliths of northwestern Europe, the palaces of Crete, the mysterious cave paintings of France. Now archeologist Barry Cunliffe and a team of distinguished experts shed light on thisastonishing, long-silent world in a comprehensive and lavishly illustrated account. Ranging from the earliest settlements through the emergence of Minoan civilization to the barbarian world at the end of the Roman Empire, The Oxford Illustrated Prehistory of Europe provides a fascinating look at how successive cultures adapted to the landscape of Europe. In synthesizing thediverse findings of archeology, the authors capture the sweeping movements of peoples, the spread of agriculture, the growth of metal working, and the rise and fall of cultures. They provide intriguing insight on the Minoan and the Mycenean past underlying classical Greek history, and on thedisasters that destroyed Minoan civilization. They explore the increasingly sophisticated societies of northern Europe, revealing surprisingly far-reaching trade between different areas. The peoples of Bronze Age Denmark, for instance, sent amber to Germany in return for scarce metal, while newtechnologies spread widely across the continent. The book continues through the end of the Roman Empire, exploring the barbarian world beyond Rome's northern frontier. For centuries, we knew little of the European civilizations that preceded classical Greece or arose outside of the Roman Empire, beyond ancient myths and the writings of Roman observers. Now the most recent discoveries of archeology have been synthesized into one exciting volume. Featuringhundreds of stunning photographs (many in full color), this book provides the most complete account available of the prehistory of European civilization.