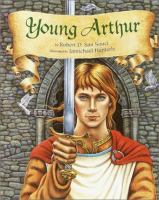 Recounts the story of King Arthur's boyhood, the sword in the stone, his first victorious battle, and his unification of a new kingdom.

Ages 6^-8. This picture book retells the story of Arthur's youth: his birth, his mother and father's deaths, his training as a squire, the sword in the stone, the gift of Excalibur, his first battle, and his vow to become a great king. The telling reads smoothly, though it moves so quickly that it seems to skim through the story like a stone skipping across water, hitting significant points but leaving gaps in between. Still, there's plenty of action and drama here, illustrated in large, highly colored pictures that look rather formal or posed. In contrast, the most effective illustration is a dreamlike night scene using muted colors, graceful forms, and subdued facial features. For larger collections and those seeking short, accessible versions of the Arthurian legend. ((Reviewed November 1, 1997)) Copyright 2000 Booklist Reviews

Through the eyes of San Souci and Henterly, Young Guinevere (1993), Young Lancelot (1996, both Doubleday), and now Arthur grow to promising adulthood in the years before Camelot. Smoothly and with engaging simplicity, San Souci spins the beginnings of Arthur's life from his birth foretold in the stars to the first victorious battle in which he wields Excalibur. There is an easy mix of magic, idealism, and the flesh and bone of heroes. Henterly's lavish color illustrations are riveting. The image of Arthur on the cover, with his piercing blue eyes, is magnetic. From the opening pages in which a fiery dragon shape is seen in the stars over Stonehenge, the artist blends the romance and solidity of medieval England. Decorative borders on backgrounds mottled like parchment set off the full- and double-page paintings. The effect is luxurious. San Souci's source note credits Tennyson, Andrew Lang, and Howard Pyle among others. While the language is spare and accessible to younger readers, this book should attract older browsers. A worthwhile addition to the body of recent work that keeps the legend fresh. Sally Margolis, formerly at Deerfield Public Library, IL Copyright 1998 School Library Journal Reviews

A lavishly illustrated retelling of the legendary king's life tells of how his royal parents hid him to protect him from their enemies, his reclaiming of the throne after retrieving the magical sword Excalibur, and his adventures as king.

Recounts the story of King Arthur's boyhood, the sword in the stone, his first victorious battle, and his unification of a new kingdom

Recounts the story of King Arthur's boyhood, the sword in the stone, his first victorious battle, and his unification of a new kingdom.