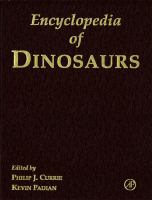 %% This is a multi-book review: SEE also the title "Dinosaurs". %% It is safe to say that dinosaurs are popular. Since the discovery of the first dinosaur fossil 150 years ago, our fascination with the most successful animal to ever populate the earth has been passionate and intense. In popular culture, the dinosaur is stereotypically portrayed as a monster from our worst nightmares; in science, it represents one of the greatest scientific mysteries nature has ever written. However, as the recent controversy between scientist John Horner and producer/director Steven Spielberg attests, these two worlds rarely meet in agreement.Donald F. Glut's Dinosaurs: The Encyclopedia and Philip J. Currie and Kevin Padian's Encyclopedia of Dinosaurs attempt to bridge this chasm in informative and accessible ways. They are published at a time when "dinomania" is at a new height, inspired in part by the Jurassic Park movies. As author Michael Crichton notes in the foreword to Currie and Padian: "In every country of the world, children and adults are entranced by dinosaurs." These works also come out in the midst of a three-decade boom in the study of dinosauria that has been motivated by John Ostrom's discovery in the 1960s of the birdlike Dienonychus genus.Encyclopedia of Dinosaurs opens with a dedication to Ostrom, telling the story of his find and its subsequent influence on the science. The encyclopedia itself provides a wonderful reference to the literature and science of dinosaurs that have resulted from Ostrom's work. As the editors note, it is intended as a resource, not as an exhaustive compendium. It is composed of alphabetically arranged essays on a variety of topics: Abelisauridae, Behavior, Jurassic Park, Zigong Dinosaur Museum. There is a thematic table of contents and an extensive index. All essays are signed by the various experts that have written them and usually feature detailed bibliographies and cross-references. The bibliographies cite both English-and non-English-language journal articles and monographs. Additional features are an alphabetized, classified list of dinosaur genera, a list of further readings, a chronology related to the study of prehistoric life, and a glossary. Most of the illustrations are black and white, although there are some colorplates.In the preface to Encyclopedia of Dinosaurs, Currie and Padian note that Donald F. Glut's New Dinosaur Dictionary (Citadel, 1982) provides a comprehensive listing of dinosaurian names and histories. Dinosaurs: The Encyclopedia is a detailed and much more technical revision of Glut's earlier work, accounting for the discoveries and taxonomic revisions of the last two decades. Glut has organized his new volume into sections: Background, Dinosaurian Systematics, Dinosaurian Genera, Nomina Nuda ("naked names," or doubtful genera), and Excluded Genera. Also included are an index, a glossary of terms, and a thorough bibliography. It is the section Dinosaurian Genera that is the most extensive, being an alphabetical compilation of dinosaurian generic names, from Abelisaurus to Zizhonosaurus. Entries generally include description and comments, in addition to information on first publication in paleontological literature.Both of these works serve as ideal companions to one another. Encyclopedia of Dinosaurs is less technical, so it would fit into a public or undergraduate library reference collection with ease. Glut's work is more suited to an academic library or a library that also has other, more accessible reference works to accompany it. Both are worthy of the stature dinosaurs have earned in contemporary culture. ((Reviewed November 1, 1997)) Copyright 2000 Booklist Reviews

Highly recommended for a wide range of libraries, this invaluable encyclopedic dictionary is accessible enough for larger public libraries, yet sufficiently technical to appeal to undergraduates, graduate students, and faculty. Its 275 articles cover specific dinosaur families as well as general topics such as dinosaur behavior, dinosaur tracks, and fossil reconstruction. Articles vary in length from a few paragraphs on narrow topics such as specific fossil sites to several pages on broader topics. Most articles include substantial bibliographies. Several articles survey topics essential to understanding dinosaur biology (e.g., evolution, biogeography, paleoecology). All articles are heavily cross-referenced, and an extensive subject index unites the diverse entries. Similar works include The Dinosauria, ed. by D.B. Weishampel (CH, Mar'91), and Donald F. Glut's Dinosaurs: The Encyclopedia (CH, Feb'98). The scope of Currie's encyclopedia is generally broader than Weishampel's, and the two encyclopedias nicely complement one another. Currie's coverage of anatomy and taxonomy is less detailed, with fewer skeletal illustrations, but all taxonomic articles are thoroughly referenced for further research. Glut's encyclopedia is closer in scope to Currie's. Both Glut and Currie have a wider appeal and are profusely illustrated, including several color plates. Larger libraries should consider acquiring all three. An online prospectus of Currie's encyclopedia, including contents and sample articles, can be found at . Copyright 1999 American Library Association

The Encyclopedia of Dinosaurs is a well-organized, reputable, and comprehensive resource, and a must for all academic libraries. Two hundred seventy five articles, organized alphabetically, cover not only the known groups of dinosaurs, but biology, environments, localities, institutions, expeditions, and research techniques as well. Articles range from one paragraph to fifteen pages, with numerous cross-references to help navigate the 800 plus page book. Most of the articles finish with bibliographies, making this work an excellent place to start research on a given topic. Added value comes via a separate index for dinosaur Genera, a bibliography of general works, a chronology covering discoveries and research, a glossary particularly valuable for its coverage of anatomy, and a comprehensive index of almost 6,000 terms.Photographs, drawings, graphs, and tables are found on almost every page, though their use varies from article to article, since 125 authors contributed to this work. Naturally enough, drawings and photographs of skeletons are predominant. There are four short sections of color plates.Although there are other books in the field, notably, David B. Weishampel's The Dinosauria (University of California Press, 1990), the scope and authority of the Encyclopedia of Dinosaurs is unmatched. It is recommended for all libraries, because it is advanced enough for graduate students and faculty, yet easy enough to use and so well referenced that undergraduates could make use of it as well.Reviewer: Jonathan Nabe, Assistant Science Librarian and Biology Librarian, SUNY at Stony Brook Life Sciences Library, jnabe@ccmail.sunysb.eduCopyright 2000 YBP Library Services

Here are two new encyclopedias for the more serious dinosaur enthusiast. Intended as a companion to the classic taxonomic reference, The Dinosauria (LJ 3/15/91), Encyclopedia of Dinosaurs emphasizes discoveries published in the scientific literature since 1990. In this context, the paucity of maps and illustrations seems a less serious omission. Written by well-known paleontologists and organized alphabetically by subject, the signed articles cover kinds of dinosaurs, biology, geology, research, and museums where dinosaurs are on display, including a worldwide list of museums and sites. There is some overlap with The Dinosauria in dinosaur descriptions, but this encyclopedia offers authoritative articles on many topics not covered in that work, such as "color," "intelligence," and "ornamentation." While the language may sometimes be too technical for the general reader, Encyclopedia of Dinosaurs provides a nice link between popular and scientific dinosaur studies. The author of The Complete Dinosaur Dictionary (Carol Pub., 1995), which was aimed at young adults, Glut now offers a far more detailed and technical work oriented toward dinosaur material in museum collections. Following 74 pages of background information, the encyclopedia is devoted to an alphabetical list of dinosaur genera. Each entry tells the date of discovery, name derivation, occurrence, age, and diagnosis; gives a list of key print references; and refers to important museum specimens that have furthered the study of dinosaur paleontology. The black-and-white illustrations are mainly photos of museum specimens and reconstructions, with a deliberate avoidance of fanciful interpretation. The emphasis on museum collections makes this a unique work. Both titles are recommended for academic and larger public libraries. Amy Brunvand, Univ. of Utah Lib., Salt Lake City Copyright 1998 Library Journal Reviews

Although this is definitely an adult reference book, libraries with young dinosaur aficionados should prick up their ears. Topics are arranged alphabetically, with generous cross-referencing. The articles are written by experts; for instance, John Horner has penned an article that discusses his discoveries about dinosaur parental care. Besides chapters on individual dinosaurs, this book covers some intriguing territory, including topics such as "Diet," "Color," "Problems with the Fossil Record," and "Size and Scaling" (which explains how extinct dinosaurs are weighed). There are also articles about specific digs and sites. Most of the articles cite references. Small black-and-white illustrations and a few color plates expand on the text. What most recommends this densely written volume is that it brings readers straight to the facts, fresh from the scientists' mouths, instead of filtering the information through an intermediary writer. Cathryn A. Camper, Minneapolis Public Library Copyright 1998 School Library Journal Reviews

Entries cover such topics as dinosaur parental care, diet, color, and size and scaling, as well as information on specific digs

Contains 275 original articles on all aspects of dinosaur science, including behavior and biology, major sites, important discoveries, and recent advances in dinosaur discovery and research over the past 25 years. Articles are cross referenced and illustrated with color and b&w photos, paintings, drawings, and diagrams. Back matter includes a dinosaur genera, a chronology, and a glossary. For general readers and researchers. Annotation c. by Book News, Inc., Portland, Or.

This book is the most authoritative encyclopedia ever prepared on dinosaurs and dinosaur science. In addition to entries on specific animals such as Tyrannosaurus, Triceratops, and Velociraptor, the Encyclopedia of Dinosaurs covers reproduction, behavior, physiology, and extinction. The book is generously illustrated with many detailed drawings and photographs, and includes color pictures and illustrations that feature interpretations of the best known and most important animals. All alphabetical entries are cross-referenced internally, as well as at the end of each entry. The Encyclopedia includes up-to-date references that encourage the reader to investigate personal interests.The most authoritative encyclopedia ever prepared on dinosaursIncludes many detailed drawings, photographs and illustrations in both color and black-and-whiteContains comprehensively cross-referenced alphabetical entries with internal references, as well as references at the conclusion of each entryProvides in-depth references, allowing readers to pursue independent interestsIncludes sixteen plates and 35 color illustrations

This book is the most authoritative encyclopedia ever prepared on dinosaurs and dinosaur science. In addition to entries on specific animals such as Tyrannosaurus, Triceratops, and Velociraptor, the Encyclopedia of Dinosaurs covers reproduction, behavior, physiology, and extinction. The book is generously illustrated with many detailed drawings and photographs, and includes color pictures and illustrations that feature interpretations of the best known and most important animals. All alphabetical entries are cross-referenced internally, as well as at the end of each entry. The Encyclopedia includes up-to-date references that encourage the reader to investigate personal interests.The most authoritative encyclopedia ever prepared on dinosaurs Includes many detailed drawings, photographs and illustrations in both color and black-and-white Contains comprehensively cross-referenced alphabetical entries with internal references, as well as references at the conclusion of each entry Provides in-depth references, allowing readers to pursue independent interests Includes sixteen plates and 35 color illustrations