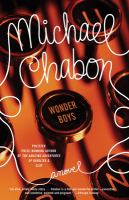 For Booker, the essence of comedy is when a "little world" (e.g., a family) undergoes the "transition between two general states"-confusion/darkness and clarity/light. Aristophanes wrote the prototype way back in 411 B.C.E. Lysistrata's warrior menfolk realize where their "inmost priorities lie" when their womenfolk deny them sex in order to stop their wars. When they reunite with their mates, confusion turns to light (aka makeup sex). In my world of Scooby-Doo, the analog is when Velma finds her inevitably dropped glasses and the plot becomes, literally, clearer. Booker uses Jane Austen (excuse my throwing-up noises) as one example, ipso facto Pride and Prejudice and Zombies fits. So would, imho, almost any character-driven tale from Scott Westerfield's "Leviathan" series to Chuck Klosterman's Downtown Owl. Chabon's incredible works generally end with much joy after massive, uproarious confusion; The Wonder Boys features the maximum of both. Grady Tripp, a classic "professor gone-to-seed," was once a "wonder boy" with a bang-up first novel. Now he's a pot-smoking lump who can't let go of his unfinishable second book, which now comprises a stack higher than five reams of copy paper. There's a lot of arguing, a shot dog, a stranded tuba, a dissolving marriage, and the massive, unfinished magnum opus. Three male leads all take turns undergoing various kinds of crises, but our sympathies lie with Tripp, who eventually has a joyful reunion with his pregnant lover and moves on to write anew. All the comedy elements are there; confusion has cleared, and Velma found her glasses. Jinkies! - Douglas Lord, "Books for Dudes," Booksmack! 10/6/11 (c) Copyright 2011. Library Journals LLC, a wholly owned subsidiary of Media Source, Inc. No redistribution permitted.

Chabon himself is something of a wonder boy; his first novel, The Mysteries of Pittsburgh, presided on the New York Times Best Sellers list for 12 weeks. Here, his eponymous heroes are Grady, an aging author attempting to write his chef-d'oeuvre, and his randy editor, Tripp. Copyright 1994 Cahners Business Information.

Mixing comic?even slapstick?events with the serious theme of bright promise gone awry, Chabon has produced an impeccably constructed novel that sparkles with inventiveness and wit neatly permeated with rue. The once-promising eponymous ``wonder boys'' are Grady Tripp and Terry Crabtree, friends since college, where they both determined to make their mark in literature. Now they are self-destructive adults whose rare meetings occasion an eruption of zany events. Narrator Grady, a professor/novelist whose unfinished work-in-progress, Wonder Boys, stands at 2000-plus endlessly revised pages, has destroyed three marriages through compulsive philandering and a marijuana habit. Terry is a devil-may-care, sexually predatory editor who has patiently endured Grady's writing block but who tells Grady, when he arrives at the annual literary conference at Grady's small Pittsburgh college, that he expects to be fired momentarily from his job. Grady and Terry, later joined by the campus's newest potential ``wonder boy,'' a talented but mendacious student named James Leer, set in motion a series of darkly funny misadventures. Farcical scenes arise credibly out of multiplying contretemps, culminating in a stoned Grady's wild ride in a stolen car in whose trunk rest a tuba and the corpses of a blind dog and a boa constrictor. All of this affords Chabon a solid platform for some freewheeling satire about the yearnings, delusions and foibles of writers and other folk. Throughout, his elegant prose, breathtaking imagery and wickedly on-target dialogue precisely illuminate his characters' gentle absurdities. The pace of this vastly entertaining novel never abates for a second, as we watch Grady slide inexorably into emotional and professional chaos. Above all, though, this is a feast for lovers of writing and books, with the author's fierce understanding of what Grady calls ``the midnight disease,'' the irresistible, destructive urge of a writer to experience his characters' fates. Author tour. (Mar.) Copyright 1995 Cahners Business Information.

In a story exploring the theme of the artist's isolation, Grady Tripp, an obese, aging writer who has lost his way, and debauched editor Terry Crabtree struggle to rekindle their friendship, a sense of adventure, and purpose in their lives. Reprint. 20,000 first printing.

A modern classic, now in a welcome new edition, Wonder Boys firmly established Michael Chabon as a force to be reckoned with in American fiction. At once a deft parody of the American fame factory and a piercing portrait of young and old desire, this novel introduces two unforgettable characters: Grady Tripp, a former publishing prodigy now lost in a fog of pot and passion and stalled in the midst of his endless second book, and Grady’s student, James Leer, a budding writer obsessed with Hollywood self-destruction and struggling with his own searching heart. All those who love Michael Chabon’s The Yiddish Policemen’s Union and his Pulitzer Prize-winning The Amazing Adventures of Kavalier and Clay will find the same elegant imagination, bold humor, and undeniable warmth at work in Wonder Boys. “[A] wise, wildly funny story . . . Chabon is a flat-out wonderful writer– evocative and inventive, pointed and poignant.”–Chicago Tribune “Whether making us laugh or making us feel the breathtaking impermanence of things, Michael Chabon keeps us wide awake and reading.”–All Things Considered “Beguiling and wickedly smart . . . There is first-rate satirical farce in Chabon’s novel but essentially it is something rarer: satirical comedy.”–Los Angeles Times Book Review