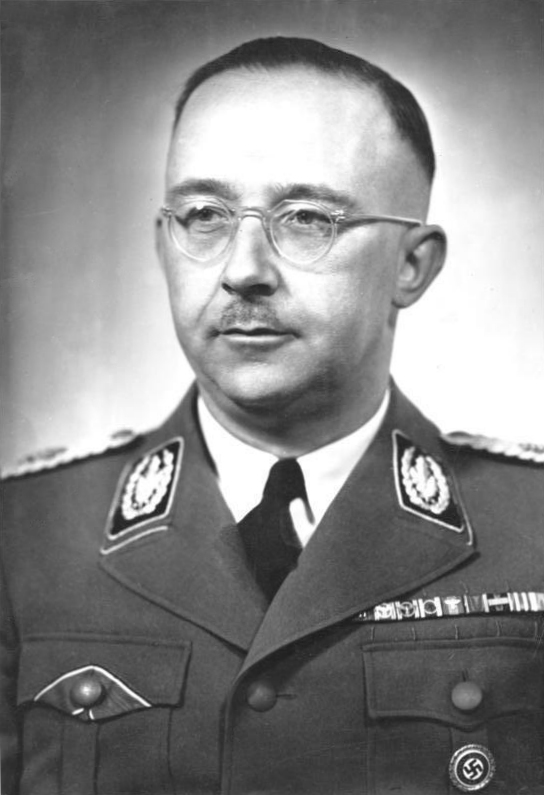 Heinrich Luitpold Himmler (; 7 October 1900 – 23 May 1945) was of the (Protection Squadron; SS), and a leading member of the Nazi Party of Germany. Himmler was one of the most powerful men in Nazi Germany and a main architect of the Holocaust.

As a member of a reserve battalion during World War I, Himmler did not see active service. He studied agronomy in university, and joined the Nazi Party in 1923 and the SS in 1925. In 1929, he was appointed by Adolf Hitler. Over the next 16 years, he developed the SS from a mere 290-man battalion into a million-strong paramilitary group, and set up and controlled the Nazi concentration camps. He was known for good organisational skills and for selecting highly competent subordinates, such as Reinhard Heydrich in 1931. From 1943 onwards, he was both Chief of German Police and Minister of the Interior, overseeing all internal and external police and security forces, including the Gestapo (Secret State Police). He controlled the Waffen-SS, the military branch of the SS. Himmler held an interest in varieties of occultism and ''Völkisch'' topics, and he employed elements of these beliefs to develop the racial policy of Nazi Germany and incorporated esoteric symbolism and rituals into the SS.

Himmler formed the and built extermination camps. As overseer of the Nazi genocidal programs, Himmler directed the killing of some six million Jews, between 200,000 and 500,000 Romani people, and other victims. The total number of civilians killed by the regime is estimated at eleven to fourteen million people. Most of them were Polish and Soviet citizens.

Late in World War II, Hitler briefly appointed him a military commander and later Commander of the Replacement (Home) Army and General Plenipotentiary for the administration of the entire Third Reich (''Generalbevollmächtigter für die Verwaltung''). Specifically, he was given command of the Army Group Upper Rhine and the Army Group Vistula. After Himmler failed to achieve his assigned objectives, Hitler replaced him in these posts. Realising the war was lost, Himmler attempted to open peace talks with the western Allies without Hitler's knowledge, shortly before the end of the war. Hearing of this, Hitler dismissed him from all his posts in April 1945 and ordered his arrest. Himmler attempted to go into hiding, but was detained and then arrested by British forces once his identity became known. While in British custody, he committed suicide on 23 May 1945. Provided by Wikipedia
If we do not own what you are looking for, we can try to get it via Interlibrary Loan / Suggest a Purchase
Loading...